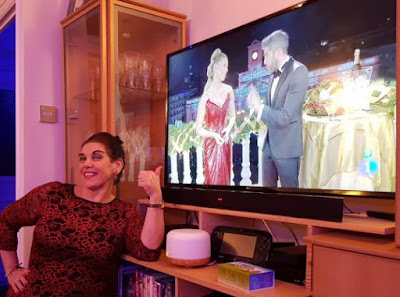 The dogs had a good night and so consequently did I. Over brekkie I watched the last episode of the second season of “Mars”. It was a good show; I wonder if there will be a third season?
I did chuckle as I looked at Facebook this morning. Someone was selling their old tat and was making great show of how their rubbish as being sold at a bargain price, even though you could buy the same things (brand new) cheaper in the shops. “NEED GONE!” was the caption on several items. If you need it gone, why not consider the dustbin. I’ve got quite a lot of stuff that I’d like to sell if only anyone would pay for it.

This morning the radio's current affairs program was edited by "George The Poet". No - I'd never heard of him either. He's some (c)rapper who seemed to be pretending to be fifteen years younger than he actually was. With the "Thought for the Day" presented by "Guvna B"  and great swathes of the show devoted to the influence of grime music on British culture, the entire thing sounded like an episode of "People Just Do Nothing". Which is quite a fun show to watch all the time you realise that the show is a piss-take, and not intended to be taken seriously. Bearing in mind some of the other guest editors they have had on the radio over the Christmas period, I can't help but think that the BBC could have done a whole lot better today.

I stopped off at Aldi; I must admit that I have to ask myself why. I didn't really need anything and I didn't get anything. But I suppose that (bearing in mind the wonders of their centre ailes) I might have done.

Work was work. I did my bit. As I worked I was rather conscious that there was a geo-meet today and that friends were out walking whilst I was working. But I've done this "oh-I'm-working" sulk to death over the last week or so.
As I worked I had a phone call. Mum was being discharged from hospital. Having been in the place for six days the doctors had decided that she'd had "one of those things", was probably better, and had sent her home.

Once home I settled the dogs, put on my red pants (it’s a Spanish thing) and the bat drove us down to the traditional New Year bash with Jose and Maria. We had a rather good evening; I stayed awake for the grapes and Spanish New Year at eleven o’clock, but for the first time ever I slept through the New Year at midnight… I’m getting old.