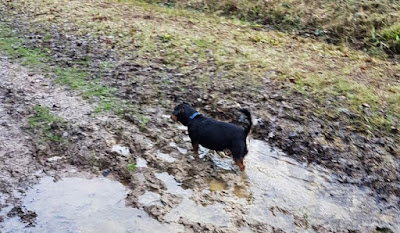 The night shift was hard work last night; and reports of a monster in the ladies’ lavatory just compounded the issue, as well they might. Mind you as I left work I captured a bouncer (it’s a Munzee thing) so that was something of a result.
As I drove home the pundits on the radio were interviewing some of the country’s commercial fishermen. These people were clearly looking forward to Brexit; naively feeling that Johnny Foreigner wouldn’t dare come near what they saw as *their* fishing grounds, and God help them if they did. Their rabid inarticulate xenophobia was so clear in what they were ranting, and their utter inability to construct a coherent sentence (let alone answer what was being asked of them) made me quite ashamed to be British. It wasn’t that long ago that the Royal Navy had to sort out a piscatorial contretemps. I’ve said before (many times) now that Brexit is a reality, the United Kingdom (or what will be left of it) will be at war with Europe in my lifetime, and it will be the commercial fishermen who will start it.

I came home, and once the dogs had got over their excitement at seeing me, we all got into the car and went to Orlestone Woods. Unlike yesterday we actually went there. We had a very short walk; Sid wasn’t going very fast. He didn’t like the mud, and there was a lot of mud not to like. I went out with four small dogs and came back with four swamp-beasts. It was a shame that we arrived home just as a small dog-loving child walked past. He squealed in excitement at seeing four dogs (apparently he loves dogs and gets over-excited enough with just one) so like an idiot I took the dogs to say “hello”.
His mother was very understanding.
We scraped off the worst of the mud, and the rest will brush off when it dries. But the littlun was ecstatic at meeting, stroking and cuddling four dogs, and that’s all that counts really, isn’t it?

I bundled the hounds into the bath for an intensive scrubbing session, and with dogs scrubbed they were all soon snoring. I quietly got Fudge away from the rest, and we went to the vet’s for his check-up. What with the spondylosis and the kidney failure he’s actually a rather poorly pup (not that anyone could tell by looking at him).
He had a blood test, and while we waited for the results we walked around the pet shop where we peed up some cat litter. Eventually the results were ready, and we went back in to see the vet. His back isn’t getting any better; neither are his kidneys. But then, they won’t. Both his conditions are chronic and incurable. But they haven’t got any worse. And he’s put on weight which is a good thing.

I had such plans for the afternoon. I was going to do the ironing, I was going to watch telly… I woke up still sitting on the sofa several hours later with neck ache.
I had a little look at the accounts – spending close on two hundred quid at the vet on a dog that I never wanted (!) did make a dent in the finances, but what is money for if not to squander foolishly?
I programmed “Hannah” for tomorrow; for once it all worked on the first attempt, then I spent a little while learning more about Munzee-ing. For a silly game it seems to be rather fun. Is this to be the next great craze? I suspect that (like geocaching) it won’t be long before I’ve done pretty much all of the local ones.

"er indoors TM" came home and boiled up a rather good bit of fish and chips. I think I’m going to have an early night… I’m really tired.