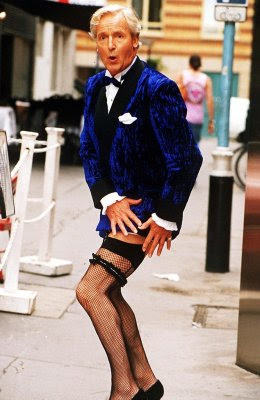 Over brekkie I watched the episode of “Schitts Creek” that I slept through yesterday evening before sparking up the lap-top to peer into the depths of the internet.
I saw that my favourite music group “Sparks” are coming to the UK – they are playing a gig in London in October. I’ve been threatening to go see them live for years. I might just go this time. Tickets aren’t available yet; I suspect they won’t be cheap. If any of my loyal readers fancy a day in the wicked city followed by an evening of rather obscure music, do let me know.
I also saw talk of Paula White. This woman is “Special Adviser to the White House Faith and Opportunity Initiative” There was ain interesting little video of her preachings that you can see by clicking here. She commands satanic pregnancies to miscarry, and fights against the marine kingdom and the animal kingdom… she takes the phrase “bat shit crazy” to another level, but the worrying thing is that the American establishment (including President Trump) listen to her rantings.

Usually I leave everyone fast asleep when I go to work, but I left the house in uproar. "er indoors TM" had been convinced to got to some pre-work fitness thing with her mates, and the dogs thought that being up silly-early was a great game.

Another early shift meant for another early and dark start. Fortunately the rain which had been so loud as I scoffed brekkie had stopped.
As I drove the pundits on the radio were talking about the Government's need to make a decision about whether or not to let the Chinese tech giant Huawei get involved in the nation's 5G network. The government would seem to be keen on the idea, but President Trump has said that they mustn't. Perhaps that mad religious nut warned him about the godless communists?
First of all the radio came out with a load of talk about what a 5G network actually is. Some specialist was wheeled on; I think the radio show's producers had gone out of their way to find the nation's most patronising person to deliver this bit. 5G is (apparently) very complicated and far beyond the understanding of us mere mortals.
One of the ex-head honchos from MI6 then came on and explained how the Chinese don't let any non-Chinese nationals get involved in their country's communication technology, and how pretty much no other country in the world has let Huawei into their networks because they aren't stupid, and the consequences of doing so are monumental. Heaven forbid that someone in Beijing might find out what I had for brekkie or see the photo I just took of my dogs.
Almost as an afterthought they then interviewed someone who seemed to know what they were talking about. This chap explained that Huawei technology is already in place in pretty much all of the nation's infrastructure.  He went on to explain how it would cost a fortune to replace it, and how Huawei's stuff is better and cheaper than the competition. He also said that no one seems to realise that Huawei's stuff is pretty much all sourced from American suppliers in the first place anyway.
I suppose that with three days to go, the Prime Minister has to choose whether the UK is to be a vassal state of China or the USA... Not a decision I'd like to have to make.

I got to work and found there was a special Munzee lurking in the works car park which was an unexpected bonus (if you like that sort of thing). I went in to work, and did my thing. Over lunch as I checked the Internet on my phone I saw that Nicholas Parsons had died. Famous for "Sale of the Century" and "Just a Minute", few remember that he was one of the better narrators of "The Rocky Horror Picture Show", or that he appeared with Rik Mayall and Adrian Edmonson.

I came home whilst it was still light (I liked that!) and walked the dogs round the block. Not a good walk, but not a bad one either. If only all three could walk at the same speed, things would have gone so much better.
With walk walked I had a cuppa and a biscuit… or that was the plan. I had the cup of coffee, but Fudge stole the biscuit and scoffed it as quickly as he could. I would expect that of Pogo, and possibly Treacle (if it was a favour she liked), but Fudge? I’ve always said that my Fudge can do no wrong, but he wolfed that piece of shortbread in double-quick time.

"er indoors TM" boiled up a rather good bit of dinner which we washed down with a (quite frankly) rather rank bottle of plonk. As we scoffed we watched “Dogs Behaving (very) Badly”; a rather engrossing TV show which makes training dogs seem to be oh-so-simple.
The reality isn’t quite that easy though…
Posted by Manky Badger at 9:26 pm