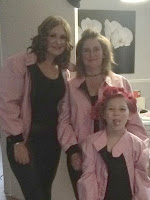 With er indoors TM" off to sell candles to the mases, I put the lead on to "Furry Face TM" and we went off for a wlk with Chris. Chris had thisidea to set a huge series of geocaches, but said (understandably) tat it was a huge undertaking. DId I want to assist with the venture? Yes - I did. We went out and between us we hid over twenty caches. I won't say where. Suffice it to say that there is still a third of teh ccircuit to be done, and what we did do took about four hours.
Whilst we were out I was so pleased to see that my little dog was well enough to roll in fox poo.

We came home via the day's cache, and then I hosed the fox dung off of the pup. an hour was wasted playing Candyy Crush Saga until er indoors TM" came home. We got on our glad rags and went round for "My Boy TM", and we all set off to my nephew's eighteenth birthday party.
We were told that fancy dress was optional. I thought we looked quite good as the cast of "Grease". About a third of the people the had made the effort to dress up in soe wy. Many of the younger ones had turned up in onesies for no reason that could detemine. My nephew looked wonderful as the Joker fro the latest Batman film. My brother looked remarkably at home in a sparkling dress. There was an interesting young lady in tight red knickers and very lttle else. There was a particulary interesting catwoman in a wipe-clean suit. And there was a coven of smurfs who were sitting in the corner radiating an aura of frank malevoloence.

It was good to meet up with many family mmbers that I haven't seen for years; being the designated driver it was entertaining to watch the antics of everyone else. There were those who patrolled the food, those whoo patrolled the jailbait Wario. It was quite funy watching seventeen year old blowing into the urinal (especially when they were not my problem). The music was far too loud; it always is. But they played soome good tunes that I knew.

All too soon it as time to come home. We staggered intto bed shortly after 2am. I wish I had taken some photos of the event.