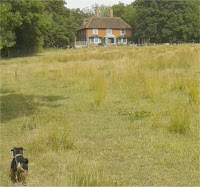 I had intended to make copious notes about the various beers I drank yesterday on my tasting notes. However there were no notes supplied so I have no idea how much ale I sank yesterday. I would guesstimate it was somewhere between six pints and a gallon. Yesterday evening was all rather vague; I can remember saying goodbye to Terry; there is a faint recollection of bandying insults with the staff in Tesco, and I woke up with my lap-top on my lap in sleep mode just after midnight.
All things considered I woke this morning feeling surprisingly well. I got up and was rather impressed with the tower of plastic pint glasses we'd acquired. Having been told by the staff at yesterday's beer festival that hey were just going to throw the things away we made a point of salvaging one or two. I counted the pile that I'd brought home. Sixty eight. Can't be bad.

After a quick brekkie we set off out on today;s mission. As we walked down the road we saw that the cars which had been parked on the double yellow lines overnight had been ticketed. Again traffic wardens strike at overtime rates. You never see them during routine hours, but at weekend nights they are all over the place.

We collected a fellow cacher, and three of us and two small dogs set off to deepest Sussex for a walk. A walk which did feature the occasional geocache (twenty, to be precise). The walk was billed as being one of eight miles; those of out party who brandish GPS units were of the opinion that the walk was closer to ten miles. But it was a worthwhile ten miles. beautiful scenery, and ideal weather for walking too.

We started with a minor mishap as Fudge's extending lead wrapped around my ankles and gave me a rather vicious rope burn. And then in my hurry to stop my dog from rolling in fox poo I skidded in the stuff and went base over apex myself. But such is life when you have a dog. It was a really good day to be out and about, and we'd picked a good place in which to be out and about. The route took us through some wonderful scenery, but I got the impression that not many people walk these footpaths; under one of the stiles we found a nesting bird. We made a point of dragging the dogs away and crossing the fence several yards away as the bird had eggs in that nest. I would have thought it rather late in the year to be incubating eggs, but I suppose the bird knows what it is doing.
And for those who enjoy hunting tupperware, the caches were varied and enjoyable (if you like that sort of thing). I even remembered to take photos this time. It's ages since I last went on a serious caching mission. must do it again soon. Maybe next Saturday...