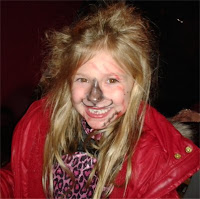 I had a wry smile at the morning's news. I see that the Disney corporation have acquired the rights to the Star Wars franchise and are planning on making a seventh Star Wars film. I can predict the film's reception already. The general public will love it in the way that they love all of these films. The (so-called) fans will hate it on general principle in the way that (so-called) fans always do.
And Disney will keep churning out more films in the genre all the time the money keeps pouring in because that's the business they are in.
The Internet was awash with comments on the subject this morning. A friend of a friend rather said it all when he commented that he loved the last film and can't wait to see the next voyage of the starship Enterprise. "Trek" and "Wars" are very different things to those who care about such trivia.
It is a very special person who knows the difference between RU12 and a Klangon, and who knows that ICUP has never been beamed up by Scotty.
Today was Hallowe'en. I had been rather vaguely looking forward to seeing loads of little trick-or-treaters coming knocking on the door this evening. But being on a 10pm finish meant that wasn't going to happen. However little Lacey had come round trick or treating last night (for some reason), and that had gone a long way to make up for my missing out on tonight's fun. Rather than asking for sweeties when she called, she showed me the haul of sweeties she'd already accrued, and she gave me a small bag of Maltesers. That choked me up. It was a shame we didn't have any sweeties to give her, but as a treat I told her to come in and play with Fudge. She seemed very happy with that.
Also being on a late finish tonight meant I got to miss the arky-ologee club. Which was a shame. For all that I run the club down, it gets me out of the house on what might otherwise be a dull evening. Tonight there was a talk on the practicalities of geophysics. I would like to have been along to that.
Today was also Samhain. Plenty of people were posting about it on Facebook and wishing everyone a happy one. Apparently Samhain is a Celtic/Gaelic traditional celebration. It always amazes me how many of the people whom I know are mad-keen on everything Gaelic/Celtic when they are all based in Kent.
You can't actually get further away from Celtic/Gaelic-land than Kent without crossing the sea...