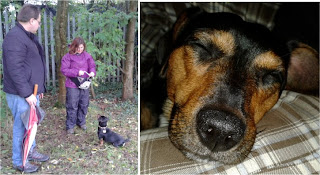 The weather forecast had predicted rain overnight till about midnight, but a dry day today. So we thought we'd put the planned walk back to mid day to allow the world to dry out a little. I emerged from my pit at 9.30am to see torrential rain outside. I sulked.
Much of the morning was then spent trying to figure out what's going on in the geocaching world. In the past whenever I've taken up a hobby I've found myself getting involved in organised clubs and (quite frankly) whenever people are involved it becomes a squabble. (Which is why I am so pleased with how the astro club has turned out).

There is a geocaching group on Facebook for the county. I've been following the postings on there lately, and quite a few posts have been very derogatory about a certain person. As a newcomer it strikes me that said person could probably have Facebook close this group down on the grounds of cyber-bullying should this person wish to make a complaint. I asked one or two people (who would seem to be in the know) what was going on. It seems that this person is (arguably) reaping what they have sewn, having been winding the geocaching community up for years. Originally their only crime was to be rather rubbish at geocaching; and other people didn't like getting emails asking for hints about where their caches actually were, and not being able to see the patently obvious.
This was some time ago. In the intervening years it's all got silly. All sorts of squabbles have gone on. Posters on the local Facebook group have advocated the deletion of electronic logs featuring this person. The same posters have then acted surprised when this individual has recently reporting geocaches as being unsafe and has formally appealed for the caches to be closed. And these people who've posted against the individual have acted even more surprised when this individual was allegedly seen destroying geocaches hidden by those with whom they have fallen out.

This morning I heard that this individual had published a "dick list" featuring the names of those they feel they have a grievance with. This "dick list" also has the names of one or two innocent bystanders who are understandably miffed to find themselves drawn into somebody else's arguments. And these people (who until this morning were neutral in the fight) are now understandably taking up arms and joining in with the squabble themselves.
Those who published the "dick list" apparently run a pub. How long will it be before their business is made to suffer by those they've quarrelled with? Why can't humanity just get on without the bickering?

We had planned to take the pestilential pup for a walk round the Godinton estate this afternoon. But the weather was still damp. The ground would just be a swamp underfoot. So we abandoned our plans and instead we teamed up with the Bat and Chris and went for walk up to town; across to the cinema, and home via the Matalan roundabout. Fudge liked the walk, and was again allowed off the lead whenever possible. He was very good, coming back when called (this time). Since it was on the way we stopped off at a few geocaches. It would have been rude not to have done so.

With "er indoors TM" out bowling I sat in front of the telly watching DVDs. As Fudge sat on my lap and dozed I took photos of him sleeping. Unlike most dogs (!) he's quite cute, really....