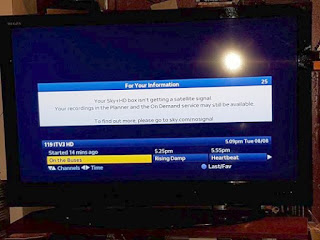 For all that I quite like the night work, I certainly greeted the morning’s relief shift with a sense of gratitude that they had arrived.
As I drove home the pundits on the radio were exploring some interesting points of law. Since the sort of law that the European Court of Human Rights deals with has been dealt with them for some years there isn’t any British based way of making up laws on human rights. It has been suggested that as and when the European Court of Human Rights makes up new laws so the British legal system just copies them.
Some see this as a good and cheap way of avoiding duplication of effort; others feel there is merit in spending an absolute fortune duplicating this effort because we are British. Island nation and all that old bollox.
I can’t help but feel that this is yet another thing that should have been thought about and discussed *before* the country got itself into this mess.

Once home I took the dogs for a walk (despite the drizzle). As we walked we met other dog walkers. Fudge played (and humped) with them. Treacle mostly ran in fear, but she did play chase with a small spaniel for a while. As we walked we met a woman we know by sight who warned us of a cyclist with a red jacket who kicked a puppy last week. I was glad that word is getting about.
As we walked my phone beeped; there was a new geocache less than half a mile away. After a moment’s excitement I realised it was the one that I put out yesterday.

We came home. I had a shower, then over brekkie watched last week’s episode of “Uncle” before taking myself off to bed for the day. The dog only woofed me awaked (for no reason) once, but the sound of the heavy ran did wake me at 3pm.
The dogs let me sleep until shortly after 4pm when Treacle insistently woke me. She wanted a tiddle. Good puppy. I then slobbed in front of the telly whilst the dogs grumbled at passers-by. Eventually they lost interest and sat with me. I was getting quite into “On The Buses” when the rain got so heavy that it blocked the satellite TV signal.

Off to the night shift again… the days between night shifts are usually dull.