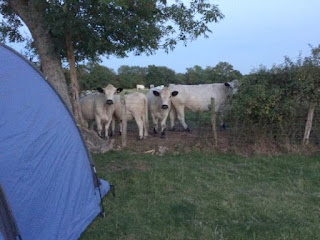 I had a restless night. When the puppy finally settled I nodded off, only to have the puppy leaping about in excitement when "er indoors TM" staggered into the tent at 2am. I struggled to get comfortable, but I was very conscious that something was moving about the campsite. Yesterday other people had mentioned that they’d heard things moving in the night. But what I could hear seemed to be in the tent. "er indoors TM" and the dogs were settled, and I felt a movement. Yesterday "er indoors TM" had mentioned that she’s seen the tent’s groundsheet move (and I’d laughed) but sure enough it was moving. A frog or a mouse was underneath it.

I gave up trying to sleep at 6.30am, got up, loaded all my odds and ends into the car and set off for home. I didn’t like leaving the clear-up to others, but I had to be away and ready for work. If I didn’t get away promptly I wouldn’t get away at all.
Once home it didn’t take long to unpack, and soon the washing machine was chewing my laundry. I scoffed my brekkie whilst watching the episode of Game of Thrones which had been broadcast in the small hours last night. It was the last episode of the current season and I was keen to watch it before I heard all about it from people who can't keep quiet. It was a good show. For all that it is rather swords and sorcery and far-fetched, for me it works as it has believable characters. Also the leading protagonists aren't super-human; the writers aren't above killing off a major character if the plot so requires.

I got the washing on to the line and I had a quick look on-line. Sure enough spoilers for Gam of Thrones were already abounding. And then I had an email. A new geocache had gone live not two miles away which would be on my way to work. For all that I have the major sulks with Geo-HQ I'm not going to give up hunting Tupperware. I will probably seriously cut back in the hiding of it, but I shall continue to hunt. After all it keeps me out of mischief and keeps me in touch with loads of friends. I shall not let idiots half-way across the world mess it up for me more than they really have to.

I got to where the cache was supposed to be. I searched and searched. After a while another searcher joined in. He gave up after ten minutes, but I persevered, and eventually found it. It was rather obvious really, but then they always are when you know where they are. An added bonus - I was the first one to find it. A cheeky FTF is always good.

In celebration of this result (and because I was too lazy to sort my own lunch) I stopped off at Aylesford McDonalds for some McLunch. The place was heaving. There were even two policemen getting their dinner. I was amazed at how busy the place was. August Bank Holiday was always busy when I worked in a restaurant on Hastings sea front. In the Harbour Restaurant we averages two hundred and fifty dinners a day. Four hundred dinners was super-busy. August Bank Holiday was always good for over six hundred. But that was on the sea front at a busy seaside town.
Why would a branch of McDonalds next door to an Aldi and a cheapo-bargain shop be so busy?

I got to work with a little time to spare, so I closed my eyes and listened to the dire music on my USB stick. I fell asleep.
I wasn't *that* late in to work. I did my bit on a surprisingly busy shift, and was grateful when the night relief arrived.
I think an early night might be a good idea…