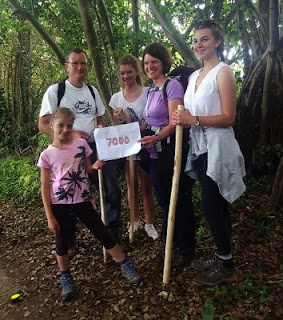 The night shift wasn’t too bad; certainly an improvement on the previous one. As I drove home the radio was broadcasting its usual Sunday morning moral dilemmas. Following all the white supremacy rallies in America during the week, the pundits were discussing the moral dimensions of physically beating seven shades of shit out of someone with whom you disagree. Some idiot woman (I have no idea who she was) seemed to feel it was quite acceptable to assault someone whose supported something as evil as fascism and nazi-ism. She also felt that it was *not* acceptable for the one getting beaten up for his views to retaliate.
I turned the radio off and listened to the tunes I’d downloaded last week.

Once home I scoffed a quick bit of brekkie, then we drove out to Cranbrook where we met Karl and Tracey and the girls. We had a rather good walk whilst hunting geocaches. The walk was rather pretty; I didn’t know that the puppy could climb trees just like a squirrel. As we walked we saw buzzards; who would have thought that such huge majestic creatures would sound so soppy? And as we wandered round our muckers found their seven thousandth cache. Result !!

Cache-wise the walk was very much one of two halves. There are two series of caches in Angley Woods. One has been there ages and consisted of a few caches which were trickier to find but relatively spaced out. The other was much newer and was one of more caches; closer together and easier to find.
But together both series made for a good wander. I was glad we went for a walk today; usually the day after the night shifts can be somewhat dull, and I’m back to work tomorrow…

I took a few photos as we walked, and with all the walking walked we drove to nearby Sissinghurst for a couple of pints before coming home.
I’m having an early night now…. I’m rather tired….