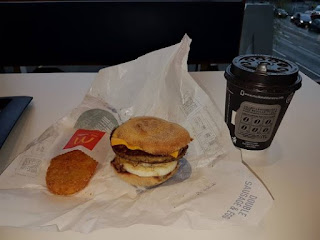 The noise of  the seriously heavy rain woke me just before 3am. I lay awake desperately putting off getting up for a tiddle. I do that quite often; I would seem to prefer laying in bed suffering rather than getting up for two minutes to go to the loo. After a while I gave up and got up. I was back in bed within minutes, but didn't get back to sleep again; the noise of the rain combined with worries about the roof leaking (again) kept me awake.
I gave up laying in bed just after 5am, and got up. Over brekkie I watched an episode of "Uncle", then set off to work. Although I was on the early shift I was leaving home rather earlier than I probably needed to; a pot-hole in Hermitage Land combined with whatever floods may have happened overnight left me feeling that my journey might be delayed.

As I drove the pundits on  the radio amazed me as they so often do. There is stagnation in the housing market; those who make money from such things are losing money hand over fist as people aren't moving houses fast enough.
I thought a house was somewhere where you live; apparently it's not. In certain circles it's seen as a financial commodity. This is entirely what's wrong with our society, isn't it?
The pundits then wheeled on another expert who felt the way forward for housing was cheap pre-fabricated houses.
All these so-called experts; no two agree on anything.

I'd left home early to have time to get through the traffic queues and floods. I was driving past the Aylesford McDonalds about fifty minutes earlier than I thought I might be, so I stopped for McBreakfast.
The day staff at Aylesford McDonalds are really organised, the early morning staff haven't a clue. I asked for a sausage and egg McMuffin meal; the woman behind the counter had never heard of it. In the end I pointed out what I wanted on the screen behind her; it was quite plain she'd never seen that screen before.
With McBrekkie eventually scoffed I set off to work. The temporary traffic lights set up for the pot hole were in place, but I couldn't see any huge pot hole. A shame - I'd been hoping to see something spectacular.
Feeling somewhat disappointed, I got in to work and did my bit.

During tea break I checked my emails - I had a notification from geocaching dot com. The geocache I couldn't find yesterday had had its co-ordinates updated. They were about ten metres out. Interesting - that might explain why I couldn't find it. (Or maybe I just can'#t find my own bum with both hands?)
I must admit that I was cold today; I found myself remembering a weekend at Teston Kite Festival fourteen years ago today. 10 August 2003 was the hottest day recorded in the UK; and that high of 38.5 oC was recorded in Kent. We were hot that day. Somewhere on a hard disk I've got diaries from the old kite festival days; I should dig them out I suppose.

However an early start combined with a shortened lunch break made for an early finish. I came home and walked my dogs round the park. Bearing in mind that I was on an early last Thursday and that it is a week since a passing cyclist kicked the puppy, I wondered if being on an early today meant I might meet that cyclist again.
Did I – I *might* have done.
As we walked from Bowen’s Field to Viccie Park a cyclist flew past then slowed down as he saw the puppy was running along the path. He went past us, looked back at the puppy, caught my eye, and then cycled off. We caught up with him later – he was circling the Hubert fountain where he again looked at the puppy and caught my eye. This time he sped off never to be seen again.
Was it him?
I don’t know. I am probably imagining all sorts of things and casting aspersions on a totally innocent passer-by. But there is no denying that I wish he’d tried something when I could have caught him.

Just as we got to the co-op field my phone rang. It was one of the supervisors at work. Could I not do the early shift tomorrow but do the daytime instead? My mind raced; why was I not wanted to work unsupervised? Had I ballsed something up? I felt physically sick but it transpired that staff shortages at the sister laboratory meant that colleagues were being moved there for the day, and having me on the core shift meant I could work unsupervised for longer.
I can be quite paranoid at times…

"er indoors TM" will be home in a minute. I wonder what she’s boiling up for tea tonight?