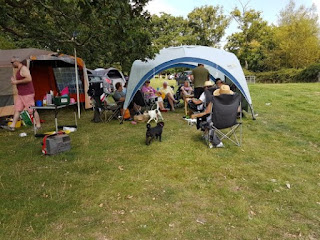 I was disturbed by some shouting at 2am. Those still drinking had realised that the puppy had gone missing. I wasn’t bothered; she was cuddled up with me in my sleeping bag. After ten minutes when their shouts got more panic-stricken it occurred to me that maybe I should say something.
Oh, how everyone laughed.

I slept fitfully; realistically I am now too old to rough it on roll-mats. I need to look at getting a camp bed. I got up about 6.30am; a lot later than usual when camping and put the kettle on. I then cleared the carnage of the previous evening and washed up. It never fails to amaze me how much washing up we generate at camp between the meals.
Those who’d heard the kettle go on and had come round looking hopeful went back to their sleeping bags when they realised that I wasn’t brewing up.

Jimbo emerged from his pit, and we went for an hour’s fishing. The fishing at the Bat-Pond was odd; for twenty years it has been very busy fishing, but tiddler after tiddler. I only caught two this morning, one was a fair size and the other was probably the biggest fish I have ever caught at the Bat-Farm.
As we fished I heard a familiar jingling. I looked up to see Fudge happily walking round the pond toward us. The pond is several hundred yards from the campsite; he’d just wandered up on his own. Two minutes after he arrived I had a very worried phone call from "er indoors TM" asking me to come back and help search for Fudge.
Jimbo caught half a dozen fish; however fishing with a dog is hard work. Fudge felt the need to try to attack every fish, and when no fish were being landed he was prowling the water’s edge desperately searching for his nemesis.

"er indoors TM" had supplied the kitchen tent with croissants; I’d had one before we went fishing. I was grateful for that. Camp brekkie is always later than I’d like. Today we finished the washing up at 11.30am.
Some went shopping, them Jose and Maria joined us for the day. Cake and cream was scoffed, drones flew, and mermaids went swimming as we had another attempt at fishing. I say fishing – some of us fished, others chucked tackle up a tree.

We then had a really good afternoon, sitting drinking beer with good friends in the sunshine. Spag Bol made for a really good bit of dinner which I washed down with still more copious amounts of beer, and once I’d washed up we sat round the camp fire. Various cheeses were passed round; my dog (sitting on my lap) and I enjoyed them all as the night fell.
I staggered off to bed just after midnight leaving the party in full flow. Back in the day I used to be the last person still up. I’m getting old..