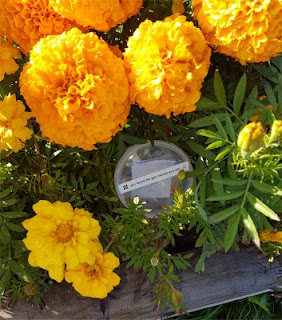 A decent night’s sleep at last. Perhaps it was catching up from the busy birthday day, or perhaps it was the bottle of champagne we had last night. We have quite a few bottles of champagne around the house which are being saved for special occasions. I don’t want to sound ungrateful, but what is I with champagne? I looked up the bottle we had last night. It costs well over thirty quid a bottle, and (for me) it is nowhere near as good as the cheap plonk we brought back from France a few months ago. And (given the choice) I’d rather have had a bottle of Doctor Pepper.
I’ve often wondered if I should go on a wine tasting course to see if I can find out what I’m missing in these expensive wines.

Over brekkie I watched an episode of “Uncle”. I considered going round the park to lay in wait for the cyclist who kicked Treacle yesterday. Trouble is he flew past so fast I have no idea who it was. I had half a mind to go chase that geocache in the flowerbed I went for yesterday. Apparently it had gone missing and had since been replaced.
Instead I sparked up my lap-top and had a look at Facebook. Twenty-one people had shared the photo of the bloke who kicked the puppy. Surely someone must know him.

I set off to work. With little traffic I found myself making rather good time, so I did go look for that geocache. Perhaps I had been somewhat harsh on the kid yesterday. Perhaps I should see what replacement he’d put out before condemning him entirely.
I got to where I was supposed to be and… I could see the cache as I drove past. The boy who had hidden it had taken one of his mother’s kitchen containers, written “geochache” all over it and shoved it in with the chrysanthemums. I suppose I shouldn’t complain as I got a First to Find out of it but… the thing is so obvious it won’t last. And with it gone people’s sat-navs will still take them to the flower box where they will rummage.

As I drove the radio was playing “Thought for the Day”. Anne Atkins (the famous broadcaster, novelist and journalist) took the opportunity to talk utter bollox for five minutes. She started off by slagging off her own family. Apparently they are scientists and can explain exactly what happens when you turn a light switch on. She maintained that time would be far better spent thanking God for the light rather than explaining it.
She then attacked yesterday’s announcement about a first step toward curing genetic disease and felt that type 1 diabetes, heart disease and Downs Syndrome are gifts from God and who are we to try to correct some of God’s more glaring blunders.
I have said before that as a child I had such high hopes for the twenty-first century.

I got to work and had a rather quiet day. But not that quiet. I had hoped to be able to slip out to Prue’s funeral today but that wasn’t possible. A shame; I would like to have been there.

Once home I walked the dogs round the park. After yesterday’s altercation today’s walk passed off far better, But we did fins a little slow-worm as we walked. I say “little”; the thing was about a foot long. I tried to move the little reptile from the path to a place of safety, but the thing was far too quick for me to catch.

I’ve had KFC for tea; "er indoors TM" is off on a works beano. If previous ones are anything to go by she’ll be home around 4am with her pants round her ears singing songs about sailors. With any luck…