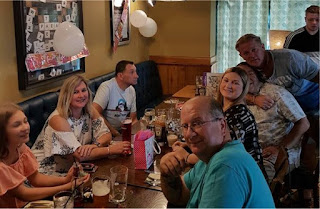 Looking back it was such a good day yesterday. The weather was wonderful and the countryside was beautiful, we were out with great friends. However I knew that yesterday’s walk was going to be challenging, and this morning after nearly eight hours sleep (!) it hurt to move.
I struggled up, and say that both "er indoors TM" and Treacle was still fast asleep. I hobbled downstairs where Fudge opened an eye, turned it to me, and then closed it again.

Over brekkie I had a look at Facebook as the washing machine did its thing. Twice. After two hours I got fed up with killing time waiting for "er indoors TM" to get up so with the washing hung out I started mowing the lawn. With lawn mowed I then cut back two dustbin-fulls of assorted foliage hanging over the fence from not-so-nice-next-door. As I worked I had the water features doing their thing. The big one was a tad whiffy so I emptied a bottle of disinfectant into it.
As I slaved away "Daddy’s Little Angel TM" and "Stormageddon - Bringer of Destruction TM" came to visit together with Sid and Pogo.
We had been planning to got to Teston kite festival today to catch up with old friends, but looking at piccies on Facebook it seemed that with one or two exceptions pretty much the entire kite-flying fraternity had gone to Portsmouth for the weekend. Teston is an hour away; a round trip to Portsmouth would take a large part of the day.
The kites can stay in their bags a little longer.

Having decided against a day out to Teston kite festival we also decided against a walk round the park; it was too hot. So we slobbed about the garden for a while before walking home with "Daddy’s Little Angel TM".
As we walked we were going past one of my geocaches. I’d had a report that the thing was probably missing. It was. I replaced it, and then archived the listing and created a new one. After five years everyone local has long since found it. Five minutes effort on my part meant that everyone could have another smiley face on their listings.

Once at the "Stormageddon-arium TM" we met up with "My Boy TM" who was visiting, and I promptly fell asleep. I was woken with a cheese roll half an hour later, and I spent a rather pleasant hour watching the most amazing videos. Some chap has make stop-animation videos of car races featuring Batman, Teenage Mutant Hero Turtles, Lightning McQueen, Buzz Lightyear and all sorts of other cartoon characters. You can see one of them by clicking here.

We came home; I dozed for a bit, then we went up to the Pheasant where we had Cheryl’s surprise birthday dinner. I ate far too much… I see a restless night ahead…