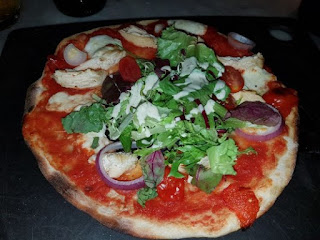 I was sleeping so well, and being on a rostered day off I had no need to be up and about early. It was such a shame that the dogs had to start a pitched battle on the bed at silly o’clock.
I gave up trying to sleep; over brekkie I had a look into cyber-space as I do. There were several people posting to Facebook from Devon. This week is the national week-long national meet-up of Tupperware hunters. There had been talk of going, but "er indoors TM" couldn’t get the time off work. I suppose what with her big birthday this week, that was probably for the best.

I also saw I’d made a geo-boo-boo. There had been issues with the series of geocaches I put out in Bethersden. Several of the caches on one stretch had intermittently been going missing. A chap doing the series told the landowner on that stretch all about geocaching, and so (armed with a map of where to look) the landowner went out and destroyed all he could find. A friend went out yesterday and fetched in all the remaining ones for me. When he told me he’d got them in I did the on-line archiving not thinking that he might not have done his geo-admin. Woops.
To some people this would be a matter of life and death, to others it would be petty triviality. Each to their own.

Seeing a large parking space outside the house I fetched my car round… I wish I hadn’t. As I walked up the road there was a near-miss as a cyclist came out of a side road into Beaver Road. The cyclist wasn’t watching the road; his eyes and both hands were on his phone and he was utterly unaware of any traffic until he was nearly over the bonnet of a passing car.
I got my car; as I drove down Beaver Road I pulled up into the parking space and stopped. I heard a screech of brakes and looked round to see a car diagonally blocking the road not six inches from the back of my car. Some irate bloke was bellowing out of his car window demanding to know what the f… I was doing. Without thinking I replied I was parking my car. That completely foxed him. He’d shot out of the shop’s forecourt fully intending to fly down the road with no regard for anyone who might consider speed limits. With a little to-ing and fro-ing he managed to get his car out of the silly angle he’d got into and headed off. Hopefully never to be seen again.

"er indoors TM" went to work. Together with the dogs I scrounged a lift as far as Godinton. There were two relatively new geocaches there. The first one had literally been thrown in a hedge; the second had been hidden with a little thought. Mind you I’m not complaining; they gave us targets for today’s walk. But I have now found every sandwich box concealed within three and a half miles of home.
We came home through the park where the dogs played in the river to cool off. The morning turned out to be hotter than I had expected.

Once home I had an early lunch which I devoured whilst watching episodes of “Time Gentlemen Please”, Good stuff to watch.
I could have then fixed the bannister; I could have pootled in the garden. But I didn’t. I’ve been rather tired lately; every day I’ve not been working I’ve been doing things, and so with the dogs asleep I had a lazy afternoon dozing in front of the telly.

"er indoors TM" came home and we went to Pizza Express where the clans gathered for a pre-birthday dinner. I’d not been there before; the food wasn’t too bad at all. But (in all honesty) I would rather have had a McDonalds…