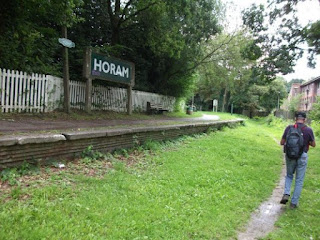 I got an hour’s sleep last night, then "er indoors TM" and the dogs came up. There was two minutes silence so’s "er indoors TM" could nod off, then the puppy started. She commenced by bothering Fudge (I could hear him growling) so after a few minutes I moved her. She then spent the rest of the night pushing forcefully against me. Eventually (at 6am) "er indoors TM" took the puppy to her side of the bed, but after fifteen minutes the puppy came back to harangue me.
A combination of the puppy and the noise of the rain against the window then kept me awake. I gave up and got up. Sleep is for woosies….

Over brekkie I had a look at the Internet. First of all I checked the weather forecast for Heathfield. Rain very early but a dry day. So the plan for the day could go ahead (hopefully). I then read Drew’s latest blog entry. He’s off to America to watch next week’s eclipse. One thing he wrote made me think. On describing dropping off his luggage during the late evening he wrote: “There was no queue at all, in fact, I was the only person there, though there were two Virgin desk attendants on duty”. I can remember being in a quiet hotel bar one evening; 11pm and three staff were on duty. Compare this to the average hospital after routine hours….
Talking of which a friend of a friend had recently had a bad experience at the local hospital. Rather than complaining through the proper channels she just scribbled out a rant and posted it on Facebook without spell-checking or grammar-checking. I suppose it is what people do these days, but will it actually achieve much?

I got myself ready, and set off to meet Dick. We then followed his sat-nav to Hellingly along a rather circuitous route, and once there we met Aleta. She hopped into the Dick-mobile and we all set off to Heathfield.
The Cuckoo Trail is a long footpath following the route of a long-since abandoned railway line, and (needless to say) there are one or two geocaches along it. The Cuckoo trail is a straight line, fourteen miles in length. Having parked one car at its mid-point we then drove to the northernmost end and walked back to that car.
It was a good walk.
I took some photos as we walked, as you can see it was rather pretty. As we walked we met other walkers and cyclists. We even met other hunters of Tupperware. We met a little toad who was four feet up a tree; the thunderstorm which started at mid day only lasted for a few minutes, and the day was only marred by Aleta going arse over tit into a clump of stinging nettles. (There’s no way of elegantly going into a clump of stinging nettles). However I can’t help but feel that East Sussex county council could have put some dog poo bins along the way; there was dog poo everywhere.

Geocache-wise we found forty-three of the forty-six caches we set out to find. One simply wasn’t there. We found one, but it was too far up a tree to get to safely. And the last one was (according to the description) over ten feet up a tree, but we couldn’t see it at all. If I had a clue where it was I might have considered scrambling up… Of the forty-three we did find, most were rather difficult finds. Many were lacking any kind of hint, and I must admit I thought the given difficulty/terrain ratings were something of an underestimate.
Also several were listed as having trackables in them; not one actually did.

We eventually got to the half-way point of the trail where we stopped walking for the day, and drove back to Heathfield where we said our goodbyes (until next week). We made good time home, and once home I walked my dogs round the park. I would have taken them for the geo-walk today, but the puppy gets travel sick and it isn’t fair to fill other people’s cars with dog-vomit.
As we walked I noticed something. The puppy stank. "er indoors TM" had walked the dogs at mid-day, and the puppy had wallowed in a ditch of stagnant water. Once home again (and having got and scoffed my dinner) I told "er indoors TM" that her puppy needed a bath.

Being Tuesday the clans gathered. “Star Trek”, “Gotham” and “Benidorm” too. Not a bad way to spend the evening…