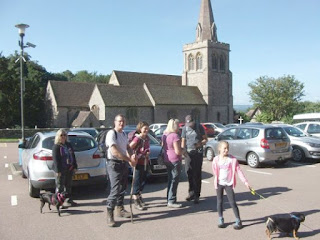 I had something of a restless night last night. "er indoors TM" was off out with her pals. When she’s off out, the dogs lay in wait for her at the front door and bark like things possessed every time they hear something outside. I get sick of telling them to shut up.
I was rather tired last night so I marched them both upstairs and shut them in the bedroom with me where they sat by the door and whimpered; obviously wanting to go woof at the front door.

Over brekkie I had a look on Facebook. I’m very tempted to take a trip to London to see the Bat out of Hell musical. If any of my loyal readers fancy a day out, let me know. I’m vaguely considering Wednesday 23 August… but I suspect I’d have to book tickets months in advance.

We got ourselves organised and set off to Linton where we soon found Karl, Tracey and Charlotte. Wayne and Lynne joined us as did Dave, and we set off on a little geo-walk. The series of caches we were following had gone live for last Saturday’s geo-meet, but we were rather busy last Saturday. We thought they might make for a good walk today.
We had a really good walk. The Kent countryside is beautiful, and the walk around Linton out to Boughton Monchelsea and back is stunning. As we walked we saw alpacas and deer, and I even saw a buzzard circling overhead. As we walked we helped ourselves to the blackberries that seemed to be everywhere, and some of us even got a plum and an apple too. Very nice!
We stopped at the church at Boughton Monchelsea; the church garden overlooks the deer park and this was an ideal spot for lunch. We scared off the normal people sitting on the benches, and as we ate so the church chucked out. We were soon joined by two small children who asked if they could stroke the dogs. Now call me old-fashioned if you will, but I always told my children not to speak to strangers. Lydia and Nathaniel’s mummy clearly never told them that. Lydia and Nathaniel were made up with the dogs, and asked if they could take them for a little walk round the church gardens. Both wanted to take Treacle as she was bouncy and running about; neither wanted my dog as he was slow and plodding. But they decided to take turns, and we had a rather peaceful dog-free lunch as the children walked the dogs about. Nathaniel told us he wanted a dog, but mummy had said no.
Mummy eventually turned up, and off they all went. I suspect mummy got a hard time from both children who both clearly loved our dogs. I wonder if they would be so keen had they seen Fudge roll in fox poo not five minutes later, and my having to give him an impromptu bath in a cattle trough.

As we walked we met several other people who also were hunting Tupperware. Jay and Clint were old friends, but we also met “Captain Navi”, “Dr D and Me”, and “Clockshop”. (A prerequisite of hunting Tupperware is a daft alias).
We found all the caches we set out to find, but there is no denying that some of them were a teeny bit tricky to unearth. I say we found them all; one was missing. Mind you they’d been hidden by a good friend, and a quick phone call established that the farmer had destroyed a hedge in the meantime, so we replaced it before adjourning to the pub.

The Bull at Linton is a rather good pub. The views from the beer garden have to be seen to be believed. We saw them and enjoyed them over three pints of rather good ale, then I slept most of the way home.
I took a few photos as we walked. Once home I put them on the Internet. I do that. What else is the Internet for? And with the dogs sleeping and "er indoors TM" bowling I settled myself in front of the telly. Poldark’s on soon. I wonder if Lieutenant Armitage is still sniffing around Demelza? Mind you with her bosom heaving like it does…

And in closing, today is something of a milestone. This is my four thousandth blog entry. The blog itself seems to have a life of its own. With over four hundred hits each week it certainly seems to be providing entertainment. Hello to all my readers… I hope you enjoy this little window into my life. I only started it as an aide-memoir for myself as I can’t remember what I did five minutes ago; let alone last year.
Since I started recording history in September 2006 I’ve not missed a day. People, fads, crazes and hobbies have come and gone. Back then I was a senior manager at the top of my career and hating every minute of it. Now I’m happy in my job doing the work for which I trained. Back then I was a scout leader feeling I was wasting my time. Not any more. Back then I probably drank too much. Not quite so much these days? Kites were a “thing” back then – I really should get them out more often. Both fruits of my loin were living at home; they’ve now spread their wings and have families of their own. But (for the most part) those and that which mattered is still on the scene today.
I wonder what the next four thousand blog entries will hold?