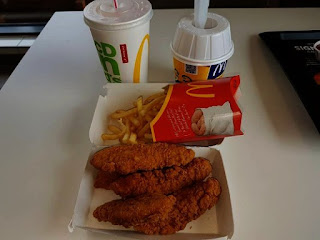 I slept well; it was a shame that "er indoors TM" had set her alarm an hour earlier than usual. I woke to find the puppy was curled up next to me. She’s no trouble when she’s quiet during the night.
Over brekkie I had a look-see on-line. More people are “taking time out” on social media. This seems to be a “thing” at the moment. But rather than just not logging in, people disable their accounts and it looks (to paranoid people like me) as though they have decided to block me. And I then spend hours worrying about what I might have done to offend.
I also saw some photos posted on-line from friends on their various holidays. Pictures from Arizona, Alcatraz, Portugal, Spain. Everyone seems to be having a good time. I like social media if only so I can see what everyone else is up to.
"er indoors TM" set off to work an hour earlier than usual, and both dogs jumped on to the back of the sofa to bark furiously at passers-by. I wish they wouldn’t. Mind you I’m glad Fudge can get on to the sofa again; it’s just a shame he jumps. We spent good money buying him a small set of steps and he refuses to use them. The lazy puppy does though.

I popped the leads on to the dogs and we went for a walk round the park. For once the puppy played (relatively) nicely with other dogs. We saw OrangeHead (minus posse) but she didn’t see us. I did notice an “odd” smell when walking past the William Road allotments; I think smoking “odd” substances is a prerequisite to being allowed an allotment there judging by how often I sniff those “odd” smells.
All things considered the walk passed off uneventfully which was for the best. However for all that things were good when the dogs were off the leads, the same can’t really be said for when they are on the leads. The puppy pulls like a train and Fudge stops every five yards to sniff where other dogs have tiddled. I can’t help but wonder if he’d be happier if I just left him in the garden with a couple of bricks that all the local dogs had piddled on. And the puppy might prefer just being chained to a post that she could pull against.
The puppy’s pulling is so intense that she’s worn bald patches around her neck where she pulls against the lead so much.
Once home I fed the pond fish. We’d had a fatality; a dead tench. On reflection, the koi feed from the surface; I don’t think tench do that. And the koi don’t leave much food to sink.

I settled the dogs, and set off to Maidstone. Yesterday Aleta had mentioned that she’d had trouble locating a geocache in Ditton. I had a go and drew a blank too. Mind you by the time I’d finished messing around it was lunch time so I got myself some McScoff and then went on to the late shift.