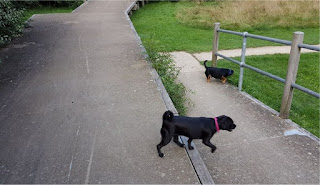 I slept like a log; I suppose two night shifts and a restless night would have made having a good night somewhat compulsory. Over brekkie I watched an episode of “Uncle” whilst the puppy chewed my arm. She is very much like a baby in that absolutely everything goes in her mouth.
With telly finished I had a mooch on-line, Nothing much was kicking off (for once) and so I set off for work.

I struggled to navigate my way up the pavement; the bin men had been out and had scattered the bins. I found out green recycling bin thrown across the pavement so I dragged it home. I assumed the food waste bin laying with it was also ours so I retrieved that one too.
Are Ashford Council *really* that desperate for bin men that they have to take these people with such a couldn’t-give-a-shit attitude?

As I drove to work the pundits on the radio were interviewing James Chapman. He was once chief of staff to the Brexit minister, and he was trying to make a case for a new British political party. The chap rudely shouted down anyone else on the radio, and (quite frankly) was talking rubbish. He had this theory that Conservative MPs disillusioned with their party might club together with Labour MPs who were also unhappy with their party. The alliance would be based on the (supposed) fact that everyone was unhappy, and would attract those who want to stay in the European Union.
Hasn’t this argument been done to death?

I got to work, and did my bit. It was a very busy bit, and my concerns of yesterday were utterly unfounded as I took command of the hospital’s blood bank for much of the day. I say “took command”; I didn’t do much commanding. Being the only bloke there I knew my place and hid quietly in the corned whilst the ladies ran the show.

Once home I took the dogs round the park. Just as we walked through Bowen’s Field I noticed the puppy was limping quite badly. I felt sick; what had she done. She came up to me; holding up her paw and whimpering. The silly dog had trodden in dog shit and didn’t like it. I wiped it as best I could in the long grass, and she seemed to rally at that.

"er indoors TM" brought home fish and chips. I like fish and chips. So do the dogs. But where Fudge just sis looking hopeful, the puppy screams for scraps. She actually screams if you don’t give her food from your plate.
I’ve got to program “Hannah” for tomorrow. I should really have an early night too…