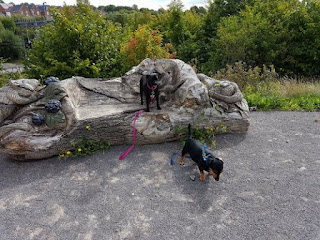 I slept well, but woke feeling rather miserable. I often do that after a good day. But we need the “bleagh” days to appreciate the good ones.
Over brekkie I saw four new geocaches had gone live locally. I could have got up and run after them for an FTF, but decided against it; I’d got a washing machine full of stuff churning that I wanted to put out, and I expected the local FTF king was already on the case. So instead I stuck to my plan for the morning.

I mooched in cyberspace until the washing machine had done its bit. With the first load of washing hung out I got a second lot into the machine, then I took the dogs for a little bit of geo-maintenance. Two of my geocaches had gone missing. I replaced one, and the other I archived and re-submitted as a new cache. Realistically after four years everyone locally has found it. Creating a new one would give everyone a little walk out (if nothing else). As we walked we met two ex-cubs mothers; both remembered me and we had a little chat.

Just as we were leaving Singleton Lake I had a look at the geo-app on my phone. Those new caches were only a few minutes’ walk away, and no one had logged a find yet. So I thought we might chase a First to Find. The nearest cache eluded us completely. I found myself rummaging in a thicket and the given hint (000556) meant nothing. So we walked a couple of hundred yards to where we found the next cache hanging in some cobwebs. But we were first to get there. FTF – happy dance.
We came home through the park, and once home Fudge ate the breakfast he’d turned his nose up at earlier. I hung out the washing as both dogs crashed out. Fudge was soon snoring, but after five minutes Treacle got on the back of the sofa and barked at the outside world. I wish she wouldn’t do that.
​
I filled the holes in the wall with a view to fixing the bannister then over some lunch (toast) I watched the episode of “Game of Thrones” that the SkyPlus box had recorded for me at 2am this morning; even though I had already seen one or two spoilers about the show. The show itself – it was OK. The fight scenes were spectacular, or so I’m told. I’m like that with fight scenes, or the chase scenes in films, or the guitar solos with bands. The bits that everyone else raves over are the bits I fast-forward through.

With telly watched I went to bed for the afternoon. I managed three hours sleep which was interrupted twice by dogs frantically barking for no reason whatsoever.
I got the laundry in; something odd had happened. It was all dry apart from one T-shirt which was still wringing wet. I wonder what had happened there?

"er indoors TM" will be home soon. She says she’ll boil up some dinner before I have to go to the night shift…