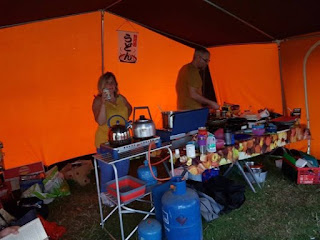 What with "er indoors TM" and the wolf pack already at camp I had a peaceful night. Mind you I was still awake at 5am. I loaded the last of the odds and ends I’d need for camp into my car, and made myself a cuppa whilst having a look at the Internet. "er indoors TM" had sent a message asking me to bring tea towels so I dutifully got some.
Squabbles were kicking off on Facebook as they so often do. There are several people I keep on my Facebook list just to follow their various arguments.
But other than squabbles very little had happened, so I set off to work.

It was early; the pundits on the radio were drivelling on about something to do with farms, so I turned the radio off and sang along with my awful music as I drove to McDonalds for brekkie. A double sausage and egg McMuffin always hits the spot.

I got to work where I had a good shift. But one thing happened that made me think. Spike Milligan’s name came up in conversation. Tobi is twenty-six years old. He’d never heard of Spike Milligan. I wonder how many other classics won’t stand the test of time?

With my shift done I got the sat-nav to aim me towards Smarden where Bat-Camp was in full flow. I arrived to something of a surprise; for the last twenty-odd years I’ve been visiting the farm, the track to the fields has been so rutted that only a tractor could get up there. Since my last visit the ruts have been filled in. It was odd being able to drive all the way to where we camp.
With everyone else having set the camp up it only took me two minutes to sort myself, and soon I was sitting with the campers that hadn’t gone to pull trees out of ponds. It was a glorious afternoon; I could have gone fishing, but an afternoon sitting swilling beer seemed a preferable option. My good mate Kev had bought me some rather good beers a few months ago and I cracked one open to start my camp in style.
Woops.
I *should* have read the label. Having bounced a bottle conditioned beer about in my car, the thing was going to be a tad lively. It exploded froth all over the place.

"er indoors TM" and the rescuers of trees were soon back on camp. My dogs were pleased to see me, and we sat around drinking beer whilst those on cookhouse duty boiled up some rather good fajitas (a camping tradition). However we’d probably been drinking a little too long and dinner was a little too late. Washing up in the dark was fun though.
We sat drinking; I had my very tired dog on my lap. I did smile when he jumped up and walked across toward our tent. I followed him; he was worn out and he took himself to his basket in our tent where he curled up and went to sleep.

More beer, the port came out shortly before midnight, and I think I went to bed shortly after that.