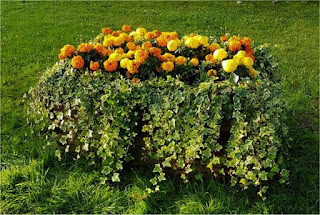 Perhaps I scoffed too much yesterday evening, perhaps it was the coffee at afternoon tea, or perhaps it was that puppy again. But whatever it was, I didn't sleep very well last night. I gave up trying to sleep at 5am, got up and as the puppy got comfortable where I had been, I spent a very worrying ten minutes trying to find my dog. He was nowhere to be found. I searched the bedrooms, behind the sofa, in the laundry basket. I even went round the garden and into the shed. the more I searched the more worried I became.
Eventually I discovered him (fast asleep) in his basket where he was supposed to be. I don't really know why I didn't look there first.
Over brekkie I watched the most recent episode of "Detectorists" that the SkyPlus box had recorded, then set off to work.

As I drove there was an interesting interview with an economist on the radio. This chap was saying that future British fiscal policy will need to be conducted carefully bearing in mind that as a nation we've deliberately decided to cripple our economy by opting to leave the European Union. He was quite vocal on the matter, and presented quite a bit of evidence which he claimed supported his position (not that I really understood it). He also implied that having done something so stupid, the rest of the world is now watching to see what idiot move we as a nation make next. I felt this wasn't perhaps the most balanced view to take, but there it is. He sounded believable, and (as always) facts are never as important as perception. You can fool all of the people all of the time provided you talk loudly and confidently.
There was also talk about genetic engineering; a vital first step has been taken to remove genetic disease from unborn babies. Who knows - generations yet unborn may never suffer with cystic fibrosis or sickle cell disease.
The pundits on the radio were interviewing an expert from the University of Kent. But the interview was rather once-sided. It was embarrassing to listen to the ignorance of the radio show's hosts when they asked the expert to sum up several years of post-doctoral research into one easy-to-understand sentence.

I'd left home early to chase a First to Find. A new geocache had gone live not a million miles from work. I thought I might get a cheeky FTF. Interestingly the thing had gone live on Monday evening and still no find had been logged. I had wondered why; that rarely (if ever) happens. Finds are usually made within a couple of hours. Two days is unheard of.
I got to where the sat-nav took me and soon realized why this remained unfound. I found a flower box on a very busy street corner.  Even at 6.45am there were endless passers-by who were looking very suspiciously at the stranger acting oddly by the flower box. The hint for finding the cache was "In the flower box". *In* it? Seriously?
I could see that others had rummaged about in the box. It had been somewhat trashed, with broken plants left in the box and dead flowers scattered on the grass nearby. I had a cursory look-see before logging a "Needs Archiving" to protect the remaining plants.
Surely the reviewer should have thought better about this before allowing this? Less than one minute on Google Street View showed the location wasn't really suitable. Furthermore the chap who hid this cache has never logged a find on any caches and (from what I can work out) is only thirteen years old.

I got to work for the early shift, and spent the day sitting in front of a microscope alternately whinging about my aching stomach and farting (when I felt I could get away with it). But an early start made for an early finish.
Once home I took the dogs round the park. The walk was progressing much the same as ever when a cyclist flew by. The puppy did her usual thing of trying to race (she races all fast-moving things).
The cyclist deliberately kicked her.
I bellowed after the chap who immediately speeded up. There’s a photo of the fellow here just in case anyone might recognise him…
I mentioned the episode to other dog walkers; some seemed to know of the chap. Apparently there is someone who cycles through the park at 6.45am and 5pm who doesn’t like dogs. Part of me wants to be waiting at the park at 6.45am tomorrow. Part of me wants to break this fellow.
But…
Realistically I have no idea who he is; I have a blurred photo of someone a hundred (or more) yards away. Were I to lay in wait tomorrow all I would do would be to harangue some innocent passer-by.
It has been suggested I tell the police. From bitter experience I know the police would be disinterested at best. They threatened *me* with arrest when I complained to them that a pervert was telling me about his sexual desires on my teenaged daughter; they wouldn’t get off their arses for a dog.