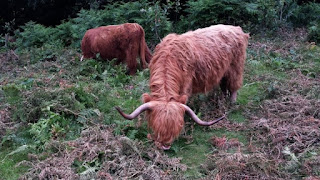 I was sleeping like a log when "Furry Face TM" declared "Red Alert" at 5am. I have no idea what bothered him, but after his little woofing fit I was wide awake. However by the time I'd got up to see what had bothered him he was fast asleep again.
Over brekkie I watched the fourth episode of "Game of Thrones". I realised something of a spoiler this monrning. Up till now I really thought that "Nudey Dragon-Girl"'s role was to flop them out from time to time to maintain the ratings. However it transpires that her character is somewhat central to the plot. I'd often wondered why they had her character in the show (if not for the obvious reason); it all makes a lot more sense now.
I also found this link on-line which shows who's "done" what to who (and how) in the show. A useful little resource perhaps?

As I drove to work I saw something I'd not seen for a while. A youngster was delivering newspapers. I didn't realise people still have newspapers delivered.
And (as always) I had the radio on. The pundits on tthe radio were talking about the latest atrocity in France. Apparently as people were out celebrating Bastille Day so a truck driven by a looney drove through the crowd, mowing people down as it went. Why did they do this? For no other reason than that because they can? Why would anyone do this?
There was also passing mention made of Mick Jagger who (at age seventy-two) is about to become a father again. I feel rather sorry for the child. Whilst they will (probably) be financially set for life; bearing in mind how old Mick Jagger is, for how long will they have their father around?

At lunch time I had a look-see on-line. I was quite flattered to see that one of my puzzle caches was being discusssed on one of the national puzzle forums. Personally I can't see why peoople find it difficult, but then I set the puzzle.

With work done I came home and (together with "er indoors TM") took "Furry Face TM" for a walk round the Warren. We found a geocache there; we failed on two others. Mind you we did see the highland cattle.
We were out a little longer than planned so we got fish and chips on the way home.
I've got guts ache now..