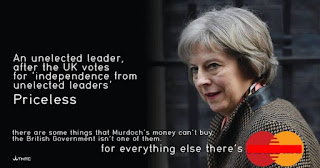 After about five hours sleep I found myslef laying wide awake. I tried to get back to sleep, but ater a little dozing I gave up and got up. Over brekkie I had a look-see on-line.
I wish I hadn't....

"Daddies Little Angel TM" (and a few others) had posted a little picture onto Facebook; the upshot of which was that after all of the mess of the referendum, we as a nation have effectively got exactly that which the majority were voting against. The comments made on that picture made for interesting reading.
In years to come future historians will look back at today and ask "WTF was going on". Having had a national referendum about leaving the European Union (a couple of weeks ago) a majority voted to leave.
Now look at how things have turned out. Having lost, the Prime Minister could not continue with any credibility, and the leading lights of the side that won have all resigned (for no adequately explored reasons). Consequently we now have a new Prime Minister who was on the losing side, and will have to take Britain out of the EU even though she doesn't agree with the decision. I can't see how she will be able to command any respect in doing so.
Ironically many of those voting to leave the EU did so because (according to the media backed up by various rantings on social media) they felt it was an undemocratic form of government. They clearly did not realise that the predicable resignation of Mr Cameron would give us a Prime Minister who was not in office as the result of a General Election. Judging by what I was reading on the Internet this morning many were not happy with this state of affairs. Even though the process of succession of Prime Ministers is well established. Look at the succession of James Callaghan, John Major and Gordon Brown..
We clearly have actually got a system which is exactly that which the majority were voting against.

And so to work. I've had a good few days off. I must admit to having a wry smile when I saw the rain this morning.
As drove the radio wittered on as it does. We have a new Prime Minister, but the Labour party remains in disarray over their leadership issues. Like him or loathe him, Jeremy Corbyn clearly does not have the support of the parliamentary Labour party. Is he the only person who can't see that this is the important issue?

I'm getting a little fed up with politics now... We've voted to leave the EU. It's time to either crap or get off the khazi

I stopped off in Morrisons for supplies then went on to work. As I worked could see torrential rain altenating with hail through the window so it was a good day to be there. Fortunately the rain stopped by home time so once home I walked "Furry Face TM" round the park. We got home just as the rain started again.

And then next door started hammering on her piano. I *really* should tell her she's no good at it.
I wonder what's on telly..