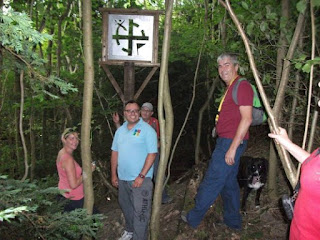 I slept for over eight hours last night. It is amazing what two night shifts can do. Over brekkie I had a look-see on-line and got a little bit cross. Lloyds bank are axing three thousand jobs and closing two hundred branches. They are blaming the decision on Brexit. Perhaps the decision to leave the EU is to blame for the job losses. Perhaps it is not. I don't know. But the decision to leave and he decision to axe has been made.
I shall allow allow myself an "I told you so" rant. But not about the rights and wrongs of Lloyds, or the decision to leave the EU. Instead I shall rant about those who made the decision to leave the EU.
What bothers me is the reaction (on social media) to today's news of some of those who loudly voted for Brexit.
One was bewailing Lloyd's decision and ranting about why the new government is actually going through with Brexit when "everyone *knew* the UK would never leave regardless of the referendum's result". She had voted "out" as some sort of protest; safe in the knowledge that the UK would stay in the EU (which was what she actually wanted).
And another chap (who at the time didn't understand the issues and so voted out because his mum ordered him to) was ranting about why didn't "they" see this coming. This chap is now (too late) in the "remain" camp because his mum has changed her mind.
Have I ever mentioned that democracy is wasted on the electorate?

I programmed "Hannah" for the day's geo-walk then spent a little while struggling with (and solving) a geo-puzzle. It was a level five difficulty. I felt rather pleased with myself.
Flushed with success then spent an hour or so in the garden. I replaced the electrical connector (for the UV light extension) I got from B&Q with a new one from Homebase. This seemed to work; I was pleased about that. Hopefully the pond electrics are now sorted for a little while. And so having freed up the extension cable I use for the lawnmower I used said cable for the lawnmower. If only I can mow the lawn weekly then it doesn't get too bad.
I strimmed the lawn edges in record time as well. I've often griped that the strimmer's cable doesn't last. When using it I'm replacing it every thirty seconds. "My Boy TM" suggested using cable ties in place of strimmer cable. They lasted about a minute. So I had this idea to use left-over washing line. It is rather thick and it goes through the grass like a rubber duck. What usually takes twenty minutes was done in two.
I then did a little preparation for the geo-meet I'm staging in August; it is amazing how long it takes to write a simple web page. And with a few minutes spare I had a look-see on-line at prices of new lap-tops. My current one is about eight years old and needs replacing. I've been recommeded the Samsung xe700t1 and the Dell XPS13. Neither are cheap.

I popped the lead onto "Furry Face TM", drove down to collect Lisa, and we set off to Otford. Earlier in the week I'd asked if anyone was free for a walk. Six of us (and two dogs) had good walk up hill and down dale. Bearing in mind we finished where we started, somehow there was a lot more "up" than "down". We met a rather threatening herd of cows, Fudge rolled *near* fox poo and I inadvertently dragged him through it. And I even manged to take a tumble at one point. But it was a good walk; being out in the countryside with friends is always good. I took a few photos whilst we walked. I do that...
After three hours (and five miles) we were back at the cars. We said our goodbyes and an hour later I was bathing my dog. If he will roll in fox poo he must pay the price.