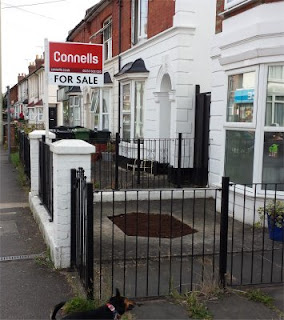 I stopped off at Go Outdoors on my way to work last night. Pretty much every member of staff asked if they could help me. They always do that when I'm just browsing. When I want help, they don't come anywhere near me.
As I browsed I saw someone who looked incredibly familiar. I watched from a distance and eventually realised it was a chap with who I'd worked many years ago. Probably about seven or eight years older than me, he'd married the older sister of an old primary school friend of mine. The last I'd heard of him he was still living in Hastings; I wonder what he was doing in Canterbury.
Mind you this chap was one (of several) who'd made my three years of working at the Royal East Sussex Hospital an absolute misery. He hadn't noticed me so I made a point of not letting him notice me. Mind you I'd recognised him after thirty-odd years, I doubt he would have recognised me.

I got to work; I was having a sulk. For all that I really don't mind the night shift when I get there, I wasn't keen on actually going and doing it. But it's not a bad game. I can have the radio turned to Radio 4 and Radio 4 Extra all night long. I don't think anyone would put up with that if I wasn't alone.

The radio droned on in the background as I worked. There was a documentary about Hilary Clinton, there were tales of Dick Barton. And there was something which frankly amazed me. In the more remote parts of Malawi some men are paid to be "Hyenas". People who live there believe that immediately following the onset of their first period, young girls must have sex with a "Hyena" or calamity and disaster will befall the entire family. And (for exactly the same inexplicable reasons) newly widowed women must have sex with a "Hyena" before they can bury her recently deceased husband. And all these sexual encounters must be without condoms or they "won't count"
There was an interview with one such "Hyena". Needless to say this chap had recently had an HIV test and was HIV positive. He was quite open that he didn't want this fact made public as it was bad for business.
FFS!!! This is the twenty-first century. Do people *really* believe in this crap?

With work done I made my way home. I saw the house next door is up for sale - the one with the decent neighbours. That's a shame.
I set the washing machine loose on some whites and then took "Furry Face TM" for a little walk. We wandered rather aimlessly, ending up at the vets where I popped him on the scales. He's not gained weight since the last weigh-in, but neither has he lost any. His weight remains constant at almost eleven kilogrammes. Which is at least two too many.

Once home I hung out the washing and saw the nice lady next door. She's expecting another baby and the two-bedroomed house is too small for them. Mind you they like the area and are only moving round the corner. I wonder who will be next in that house?

I spent the day in bed... another night shift awaits...