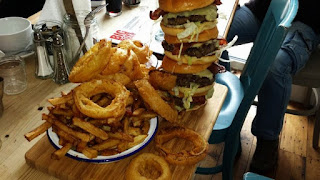 I woke at 4am, but after a swift nocturnal tiddle went back to bed and actually stayed there until 7am. That is rather unheard of. I sparked up my laptop as I sat down to brekkie and it started installing updates.Does it *really* need to render itself useless for half an hour twice a week to install these updates which seem to make no difference whatsoever to how it actually works?

I finally got my laptop up and working and (as I do) spent a few minutes looking to see whaat had happene on social media overnight. I'd not missed a lot.
So I popped the lead onto "Furry Face TM" and we drove out to Great Chart. My little dog needed a walk and I had a list of problems with my geo-series which is in the area. Admittedly the last cache of the series was broken and needed replacing, but other than that the series seemed to be in reasonable order compared with many. After all if you leave a tupperware box out in the elements for six months a certain degree of weathering is inevitable. But I'm not complaining. My Great Chart geo-series was put out with the intention that any maintenance runs that were needed would double up as a walk for Fudge, and he got a good hour and a half in the countryside this morning.
As we walked my little dog was sniffing and tracking all the way; his head was down as he intently tried to sniff out all manner of prey. It was a shame that he was so intent on sniffing that he never saw the rabbit, squirrel and pheasant that (at various times) came within four feet of him.

We got home just as "er indoors TM" was going out. Today was one of those days when everything was happening. Originally we had planed to go to France today, but for various reasons that fell through. Today was also the county geo-meet. I'd have liked to have gone there. "er indoors TM" was off canoe-ing. I wouldn't have minded a day on the river.
But today was the stag do of my Ham Street Lover. I've not seen much of him lately. Today was to be a day on the lash with old friends.

Meeting Steve at the railway station we made our way to Folkestone. It wasn't long before we met up with everyone at the Firkin. A swift pint, and then we followed a rather foxy pair of skimpy white shorts down to Kipps for a pint of stout. Suitably refreshed it was only a stagger of a few yards to the Big Boy Burger Bar where the stag failed to eat his body weight in burgers.
We then waddled down the old High Street to the harbour where we played tourist (and had a pint of Gadds No 5).
There is no denying that things were rather vague by the time I had a pornstar martini, and having started on the cocktails was a sure sign that it was time to go home

A cup of coffee went down well,and soon I was on the 18:00 to Ashford. I staggered home; maybe I should have had something for tea, but I wasn't really hungry.

Star Trek is on telly now...