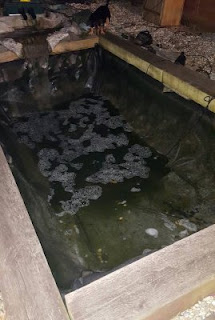 "er indoors TM" woke me at quarter to midnight. She'd been to look at the pond and seen the top of the filter box had been knocked off. Consequently water wasn't being filtered and returned to the pond but was pouring away. By the time she'd seen the problem the pond was three quarters empty.
This has never happened before in nine years of pond-ing. The obvious answer is that "Furry Face TM" got tangled in the cable when chasing cats. The cable is about small-dog-chest-height because the new cable is shorter than the old one. And this is why I was in B&Q buying stuff to connect electrical cables (to make it longer) yesterday.
By the time I'd run out the hosepipe it was well past midnight. We stood watching water trickle out of the hose for five minutes, then wet back to bed.
If only I'd made that cable longer bd buried it in the shigle yesterday evening like I'd planned to do... Mind you I have speculated on giving the pond a change of water. If nothing else that is one job less to do.

Surprisingly I then slept through until after 7am. I got up to see that the pond was filling well. I then spent a couple of minutes making mental notes of what I might take to the tip later. And my dog then tiddled on each and every item I planned to take to the tip. I suppose he thinks he's being helpful.

Over brekkie I then carried on with with some geo-puzzles. Having wasted no end of brain-ache on vignere ciphers last night I suddenly realised (when I was told!) that cistercian and subsitiution was the way forward. After seriously straining my brain I finally ended up with the same decoding that Jo had got. I'm not saying we've got it right, but at least we are both wrong in the same way. So flushed with success I carried on decoding for a few minutes as I scoffed my toast until "My Boy TM" phoned. He'd seen the photos of pond disaster on Facebook, and he was instrumental in digging the pond all those years ago.

I took "Furry Face TM" for his morning walk; as we went we met "Daddies Little Angel TM" 's old friend Kevin and his dog. We also met a Dalmation who Fudge tried to hump, and we met a furry little thing with an injured paw. This dog has his front foot bodged up in a makeshift bandage and his owner warned us of broken glass near the KFC. I must admit I'm too concerned about my dog getting hold of stray chicken bones near the KFC to worry about glass; I shall pay more attention in future.
Just as this dog's owner was trying to claim the vet had charged three hundred quid just to bandage up the foot, both dogs started playing and the bandage fell off.
I beat a hasty retreat.

Once home I emptied my car of the tat which has accumulated in it over the last few weeks and then loaded up garden rubbish to take to the tip. The smelly part of the old filter went, as did the rotten garden edgings and the light fitting which blew our fuses the other day.
I saw the pond was full so I turned off the tap. That took nine hours to fill. I left home leaving the filter running, wondering what I might come home to.

And so to the tip. As usual the people emptying their rubbish were bumbling about with no regard for anyone else, and the tip staff were looking down on everyone with utter contempt. Some things rarely change; Ashford's tip is one of them.

I then drove on to Bybrook Barn garden centre. I wanted some beach shingle; they only did coloured stones. So I drove out to Chartham garden centre. Thirty quid for six bags of shingle... this garden lark isn't cheap. As Ark Aquatics was there I got some finer filter mesh for the new filter. I had planned on a cuppa and a bit of cake, but time was short.
It was at this point that I realised I'd left my sandwiches at home so I made a flying visit to Morrisons and arrived at work one minute late.

I did my bit, and came home to find "er indoors TM" had got the hairdresser in. So I sat about for over an hour waiting for the hairdresser to finish... I'd vaguely speculated on going to the midnight showing of the new Star Trek film. Hairdresser seemed to think this was pehaps the craziest sugestion in the history of the universe.
I don't think she gets out much...