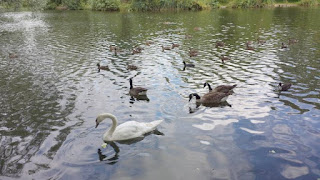 I slept well, but woke feeling rather hacked off that today was the last day of my little holiday. I spent a little while over brekkie preparing my introduction talk for the astro club meeting at the end of the month, then went out to meet "Daddies Little Angel TM" and "Stormageddon - Bringer of Destruction TM" . As we walked past the mini-mart we bought some lettuce. We've seen a few signs recently about bread being bad for ducks and how lettuce is much better for them. So armed with an iceberg we collected "My Boy TM" and Rolo and went round to Singleton Lake where we couldn't find a single duck that didn't turn its beak up at lettuce.
As we walked the dogs were sniffing round the lake. Sid over-reached himself and fell into a deep bit. Not only can poor Sid not swim but he doesn't float either. It was as well that I saw him fall in; I could see him sinking out of sight. Quick as a flash I dropped to my knees and plunged my arm into the murky depths to grab him. Just as "My Boy TM" made a rude exclamation and "Daddies Little Angel TM" turned round, I dumped a soggy pug onto the lake's bank. He was none the worse for wear after his ordeal, but he kept his distance from the water for the rest of the walk.
Five minutes later Rolo fell in too...
Ten minutes later I realised that in rescuing Sid I'd ripped a hole in my trousers and cut my knee rather badly...

We walked round the lake once, then walked Rolo and "My Boy TM" home before continuing along by the river. The Jehovah's Witnesses were at the park gates talking religion to a random passer-by. They were just onto the bit about things happening according to God's will when "Furry Face TM" jumped onto the back of their dog and did something rather un-pious.
I wonder if that was God's will too?

Once home I put the washing onto the line then over a spot of lunch I watched the second episode of "Game of Thrones". Watching the series from the begining again is making sense of what happened in the later episodes.
With lunch scoffed I got on with ironing. After all a holiday isn't a holiday if I don't do a major load of ironing.
And with ironing done I cut back all the various roses and clematis and stuff pouring over the fence from next door. After an hour of doing this the torrential rain started so I went in and spent an age doing more astro-and-geo stuff until "er indoors TM" came home.

The plan had been to go down to Folkestone to bother Jimbo this evening, but he'd gone down with the lurgey so we stayed home. We watched the last episode of "Camping" and then "Tattoo Fixers".
It all makes more space on the SkyPlus box...

I've got to go back to work tomorrow..