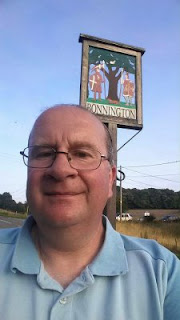 It was a rather hot and sweaty night. I woke up feeling rather bleaugh at 3am and lay awake; finally giving up and getting up at 5.15am. I went straight outside and had a little look round in the garden. For all that we'd worked endlessly yesterday, there wasn't really that much to see. This is why I dislike gardening so much; you bust a gut just to stay where you are.
Over a spot of brekkie I had a look-see on-line. Little had changed overnight. But I did see that the new geocache which had gone live in Bonnington on Thursday morning was still unfound. Bearing in mind that Bonnington is six miles in the wrong direction for work I set off about an hour earlier than I needed to. Two minutes later I came back home to collect my wallet. Fifteen minutes later I was in Bonnington.

There was a puzzle to be solved before I could find the cache. I had to find a footpath number (from a sign) and do some sums. Those sums involved a zero being divided by a zero. Now having a degree in maths I knew that wouldn't work. So I guessed that the answer was actually supposed to be one and I got some co-ordinates three hundred yards away. I walked those three hundred yards and found I was randomly in the middle of a field full of bleating sheep. My guess was wrong. I'd woken all those sheep for nothing. Have you ever woken sheep? They are rather noisy first thing in the morning.
So I guessed again that the answer might be supposed to be zero, and re-calculated. Eighty yards later I found myself at exactly the sort of place where I might hide a small plastic pot. Personally I felt that the sheep's jaw bone sitting fairly close to where I needed to search had been deliberately placed as a marker. I had a rummage and sure enough I was in the right place. I found the cache - no signatures on the log before me. I was the first one to find it. Happy dance... at 6.30am. Mind you it was a multi-cache. Getting First to Find on those is relatively easy; no one ever goes after multis (which is a shame).
It was also a shame that my trainers had leaked and I had wet feet from the dew. They stayed damp all day.

I then made my way to Canterbury listening to the radio as I went. As I drove the radio was broadcasting the farming news. Apparently there is some new GPS gadget for tractors on the market which records which bits of fields have been crop-sprayed. Using this, farmers don't spray the same bits of the fields ten times and not spray other bits at all. This was presented as being a wonderful innovation; I would have thought that such a device would have been invented years ago.

I stopped off at Sainsburys for the makings of lunch, then went in to work. I often say that when I am on the late shift the fun part of my day is effectively all over by 11.30am. Today that was 7.45am.
I then spent much of the day sulking. Today wasn't a day on which I was rota-ed to work. I'd done a swap. But for all that the swap had actually suited me, "er indoors TM" and everyone else had gone off canoeing today.
And I'd had an invite to a barbecue in Brighton today.
I also could have gone to the beer festival in Canterbury. In fact that beer festival was only a mile away from where I was working. I *could* have rallied the troops and gone for a few pints after work. But I know what I'm like at a beer festival. Bearing in mind that money is tight at the moment, shelling out fifty quid just to feel ill the next day probably isn't a good plan.
For some reason these sorts of things always happen when I'm working.

Mind you I suppose today was a better day to be working. Ashford's "Create" music festival was taking place in Viccie Park today, and I was better off away from it. In previous years I've ranted about this music festival. There was a privately organised music festival in the North park the other week. Talking to friends who were there, that seemed to pass off fine.
However the "Create" one is run by the council (at rate-payers expense) and I don't like how it's run. Because it is only a couple of minutes walk from home I feel as though I should go to it. And I go there to resent being body-searched by paid thugs before being grudgingly allowed into the park which I walk round five times every week. I also resent not being able to walk in with a bottle of ale whilst drunk teenagers stagger in carrying slabs of cans of lager. And I get arsey wasting my time and money watching on spotty dimbos who clearly cannot work the ice cream machines they are paid to operate. And my piss seriously boils when much of the park is fenced off for a week whist the set-up and take-down is going on.
I ranted about it six years ago and I'm still ranting now. I suppose I should just suck up the fact that the masses like it, and as usual I'm in the minority and shut my rattle.
But what is life without a good rant from time to time.