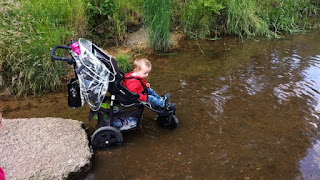 I heard an interesting fact on the radio as I worked last night. Apparently Neil Armstrong's hairdresser used to sweep up after his haircuts and sell his hair. This chap would get three thousand dollars for doing so.
I can't help but wonder who would pay that much. Mind you I could do with aa few more strands up on top...

WIth the night shift done I came home and put some washing on (how dull!) and we met up with "Daddies Little Angel TM" and "Stormageddon - Bringer of Destruction TM" and went round the park for a walk. We saw OrangeHead's gang. There is a new gang member whose haircut I can only liken to a bag of candy floss. As haircuts go it is rather impressive. In fact it looks as though the barber would have had to add hair rather than cut hair off.
Perhaps that's where NeilArmstrong's hair went, and where I'm going wrong?

We carried on to Singleton lake to feed the ducks. I say "feed the ducks"; "Daddies Little Angel TM" equipped us all with some bread. she fed the ducks, I fed the carp, and "Stormageddon - Bringer of Destruction TM" fed his slices of bread to "Furry Face TM".

Once home I hung out the washing and then spent the day asleep. I'm now off to work again.
The day between night shifts is often something of a disappointment.