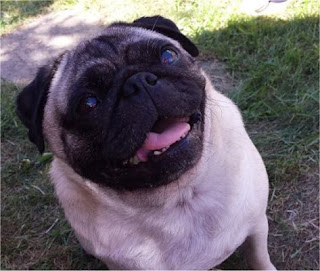 I suppose I slept reasonably well; I woke at 7am unable to breathe despite the CPAP machine's besst efforts. I'm pretty sure that I need another nasal re-bore (like I had two years ago).
I got up and over brekkie spent a little while putting the word out about this week's astro club meeting. And then I had a little look-see at the travel news. There are serious delays at Dover at the moment due to the increased terrorrist threat. Interestingly all those people who only a few weeks ago were shouting about how important it is to leave the EU to have strong border controls were today grumbling all over Facebook about the consequences of having those strong border controls.

I got dressed. I had intended to go straight to work in the garden but my dog had other ideas. So I took him round the park for a walk. All sorts of people in hi-vis jackets (with council logos and council vans) were clearing up the carnage of yesterday's "Create" festival. Fudge tried to content himself with hoovering up the scraps of food which were everywhere. I *think* I stopped him.

We came home and had a look at the pond's new filter. I thought the ultra-violet light wasn't working; I've been grumbling about it for a few days. The things are suppsed to glow. It wasn't glowing.
I took it all apart and put it back together and plugged it into the extension cable I use for the lawnmower. It glowed brightly. I put it back onto the electrical extension I'd wired in on Friday and nothing happened. It is bodged with the lawnmower's cable for the time being. I'l sort it properly later in the week.

"My Boy TM" and Lacey arrived and the idea was that we would drive round to see "Daddies Little Angel TM". My mum and dad were visiting "Stormageddon - Bringer of Destruction TM" . But it turned out that they only intended a flying visit and were gone before we could get there.
We had planned to go to Folkestone in the afternon to see the Alice in the Coastal Park show. But the chaos on the motorways made going to Folkestone an impractical idea. So we had a family barby in the garden instead. I took a few photos - not a bad way to spend the afternoon. Having spent so much time, effort and money getting the garden half-way decent we might as well use it...