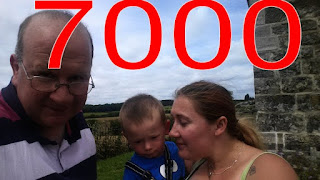 I slept well, but woke with a nagging sense of being rather pissed off for absolutely no reason that I could determine. Perhaps jam on toast was something of an anticlimax after a really good (and busy) day yesterday. Or perhaps I was sulking that I might just have wanted to be going to Brighton Kite Festival. Mind you that would have been problematical; last night I was asked to spread the word that anyone intending to be camping at the festival shouldn't arrive before mid day. The reason was that this would give the police time to remove the gypsies and other travellers from the site.
I've been criticised in the past for being less than respectful to travelling folk; all I can say is that every year they have to be evicted from the site of Brigton Kite Festival. They always seem to arrive a few days early and use the shower blocks as stables for their horses. Pressure-washing away a week's worth of horse crap takes some doing (to say nothing of the rest of the mayhem they cause). Perhaps there are good decent travellers out there; all I can say on the matter is that the ones who descend on Stanmer Park every July aren't.

I scoffed some toast whilst checking out the world via Google News. Ex Prime Minister Tony Blair looks to be in for a hard time following the publication of the Chilcot report. Did he really take the the UK into an illegal war ten years ago? In retrospect it seems he did, but did he know so at the time? It is easy to look back and realise mistakes with hindsight. He was interviewed on the radio yesterday and, as he said, at the time he was faced with a maniac apparently brandishing nuclear weapons and anthrax. If I'd been in his position I might just have done what he did. And had he not done what he did, might we now have a middle east which was an anthrax-riddled nuclear wasteland?
I don't know how things might have turned out, and realistically neither does anyone else (with any certainty).

I popped the lead onto "Furry Face TM" and we met up with "Daddies Little Angel TM" and "Stormageddon - Bringer of Destruction TM" . We went for a short walk round the park. OrangeHead was spotted in the distance; we kept her there. After a short game with some staffies we came home through the wetlands park where "Daddies Little Angel TM" was harangued by Jehovah's Witnesses. She graciously offered to read their literature. That was good of her.

With walk done I popped washing into the machine then voomed round the house with the hoover. There was a dodgy five minutes when "er indoors TM" crochet voomed up the hoover (she's recently taken up crochet). There was a strangled squawking sound and a burning smell as the crochet wrapped itself around the works of the hoover. I got a pair of scissors and after a few minutes I managed to rescue the hoover. However "er indoors TM"'s crochet didn't surrvive the ordeal. Oh well, crochet is more easily replaced than a hoover. Or that is the line I shall take.

I then went down the road to the dentist - I had an appointment with the hygenist. I was only fifteen minutes late getting in, but it seemed like an eternity. The nice lady rummaged about inside my gob for half an hour.
I'm sure she meant well but I could taste blood for some time afterwards.

I then collected "Daddies Little Angel TM" and "Stormageddon - Bringer of Destruction TM" and we went for McLunch. "Stormageddon - Bringer of Destruction TM" got a small toy cat with his happy meal and had a whale of a time throwing the thing about. We didn't disturb everyone else *that* much...
We then drove down to Bilsington for geo-reasons - there is an earthcache at the monument. I first saw Bilsington Monument during the late 1970s when camping with the Boys Brigade at Ruckinge. And it was a regular feature of the landscape when I was running cub camps just up the hill for thirteen years from 1997 to 2009. I particularly remember the summer of 1999 when volunteers were repairing the monument. They started working at dawn, and the noise of their hammering woke me most mornings.
It seemed a rather appropriate way to end filling my geo-calendar and a good cache to have for my seven thousandth find.

We then drove on to Ham Street garden centre for a mooch. "Stormageddon - Bringer of Destruction TM" spoke with the flowers, then we went for coffee and cake. They served very good coffee and cake at that garrden centre; it was only a shame that my grandson insisted on continually shouting "cock!" as we had coffee. He probably had a good reason for dong so. In years to come I shall ask him.
It was a shame that the Ham Street garden centre didn't have all the stuff I needeed, and that which they did have was more expensive than the same stuff in Bybrook Barn. So we went to Bybrook Barn where we bought (hopefully) all of the stuff we'll need for Monday's planned day of gardening. Mind you it came to over a hundred quid. Let's hope it was all worth it.

"er indoors TM" came home and we drove round to see Heather and Andy. A birthday barbecue filled the evening very well; especially with the non-EU chipolatas. Parents of the youngsters seemed concerned that the littluns were over-excited. Me I loved it. Must do it again!