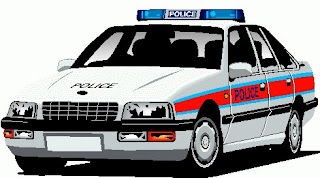 Despite a hot and humid night I slept through until nearly 5am. I got up, and went to have a look at the pond. It as pretty much as I'd left it last night. I'm not sure what I was expecting but I was somewhat releived to see the filter was still doing its thing. As I came back in to the house "Furry Face TM" started a woofing fit. I wish he wouldn't try to fight the local cats nearly two hours before most people get up.
Over brekkie I watched an episode of "Dad's Army"; it's back on the telly now the tennis has stopped. I then wrestled with a rather fiendish geo-puzzle. I *think* the thing involves a vignere cipher but I'm rather stumped with it.

There was some excitement as I drove to work this morning. Just as I was driving on to the ring road so a car sped out of one of the car parks hotly pursued by a police car. Within seconds a second police car sped past me with only inches to spare. I've since read on-line that this was supposedly some police training exercise, but friends of friends who saw this little episode within minutes of me seeing it mentioned that one car was deliberately trying to ram another. Surely police training exercises don't have innocent motorists scattering in all directions to avoid the chase? If what I saw was truly a training exercise I'd suggest whoever is in charge of the local police's training ought to have a re-think.

And (as always) I had the radio on. The latest brainwave from the government wound me up somewhat. Basically if you are healthy you will need to make sure you are registered with a G.P.; moves are afoot to have G.P. surgeries de-register people who've not visited a doctor for five years. So people will effectively be penalised for being healthy. Being de-registered will mean that people will not be able to get to a G.P, when they need one most. More strain on already over-worked hospital A & E departments.... If nothing else it will generate more paperwork as people get de-registered and seek to be re-registered. And there are those who thrive on paperwork.

I got to work, had another busy day, and came home. To my annoyance I came home via B&Q. The cable for the ultra-violet light on the new pnd filter isn't long enough. I phoned various shops, but unfortuately B&Q was the *only* place that claimed to have something to connct electical cables which will be outside and subject to the weather.
I got to B&Q and the young lad assisting me was useles to the point where I almost pointed and laughed at how little he knew about attaching one electric cable to another.

I came home, ran "Furry Face TM" round the park, then mowed the lawn. That worked up a sweat. Whilst I was there I had a look in the pond. Whilst it is far from being crystal clear it is certainly better than it was.
I could have done more in the garden, butdecide against it.
I wonder what's for tea?