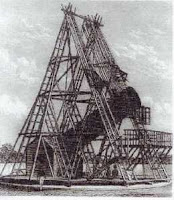 In the last week I've read "Jem" by Fred Pohl and "The Songs of Distant Earth" by Arthur C Clarke. Both classics, both favourites of mine. Yesterday I started reading "Stand on Zanzibar" by John Brunner; a classic I've been meaning to read for years. Today I gave up with it. I couldn't figure out what on Earth was going on. Having been looking forward to this (supposed) treat for many years I was disappointed, and felt somewhat cheated.
Which got me thinking. Many years ago I wrote a "Top Ten sci-fi Novels" list for a particularly wonderful magazine I once had the honour (ahem!) to edit. I might just see if I can find a back issue of that magazine, see what I wrote, and see if my top ten list has changed over the years.
If any of my loyal readers would care to come up with a top ten list of sci-fi novels, I'd be very interested to see it.

I spent a little while applying for more jobs. It occurs to me that the new-look svelte me might look better at interview than the old-look lardy version once did. However my interview suit will probably now be somewhat baggy. I'm reluctant to shell out megabucks for a new suit: I wonder if anyone might have a suit I might borrow (should I get short-listed).

And then it was off to Park Farm for a committee meeting of the astro club. We went over the plans for the next meeting, and then made serious plans for the future. There is a humungouos telescope being decommissioned in a few weeks time: did we want it? Well, yes we do (dur!) But (and there is always an "but", isn't there?) there are one or two drawbacks to the idea.
Firstly the thing is in Scotland and needs to be collected. It's a huge scope: far too big to go in a car, and would need to come down on a lorry.
Secondly it would need a dome to go into. It's currently in one which is five metres across; we'd need to build a dome for it.
Thirdly we don't have a five mete dome, so the scope would have to go into storage whilst we fund raised the money for a dome and found somewhere to build it.
Fourthly the scope is older than me, so should it go west, spare parts wouldn't be easy to find.

So the original idea might be a non-starter. But if we can scare up some land on which we could build a dome, all the rest could be done at our leisure with a more modern scope. Do any of my loyal readers have some spare land where there's no nearby street lights?