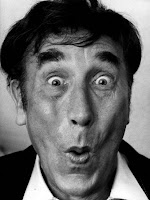 A cold morning - perhaps not as cold as elsewhere in the world; but as Albert once remarked, everything's relative. I take the line that if I have to scrape ice off of my car then it is officially cold. This morning was officially cold.
My attention was distracted as I drove along the A28 this morning - there seemed to be a large bird hovering over the fields. But there was something wrong with the bird - we eventually realised it was a tethered kite. Someone had set the thing flying and left it there. Bearing in mind we drove past at 7.30am on an icy morning, I can't help but wonder who has nothing better to do with their time than set kites off at that time on a cold day.

Work was much the same as ever; I was given some gossip - some colleagues have apparently been spotted holding hands and snogging over at the McArthur Glen outlet centre. So I spread the word (what else doe one do with gossip?) and came home again. With "er indoors TM" off out doing whatever it is that she does when off out I was left to fend for myself. In years gone by I used to fend in the general direction of the KFC. Nowadays I forage where there's fewer calories to be found. Admiral's pie and peas went down very well.

Whilst I searched for some more ebooks I put the telly on; I have to ask myself why I bothered. There was hardly anything worth watching. I started off with some dribble on the Discovery channel about Area 51. The program wittered on for an hour without actually saying anything. The next program was more dribble - this time about some martyred saints. I turned that off and found something about Frankie Howerd which wasn't too dull. I rounded the evening off with South Park and WIlly Wonka, and then put tonight's haul of ebooks onto my Kindle.
So far this week I've found over one hundred and seventy ebooks that are my sort of thing: all free....