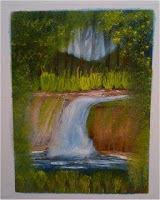 “My Boy TM ” came home “quietly”this morning, so I thought that I might as well get up. I looked at the clock to see it was 10am. A lie-in (!) After I’d abluted I had my weekly weigh-in. I’ve lost a pound this week. I was hoping to have lost more, but bearing in mind yesterday’s pig-out I should be pleased I’ve lost anything.

I spent a little while fiddling on the Internet, and then we went up to town. ‘er indoors TM wanted to go to the bank. And having banked we wandered round the clothes shops. Whilst doing this we met friends we’d not seen for ages who commented on my svelte appearance. Whilst I have lost quite a bit of weight, I’ve still got to lose over two more stone to get out of the “overweight” category. I decided not to buy any new clothes: for all that my clothes are all now rather baggy, I like them being baggy, and it’s a false economy to buy more stuff which will end up baggy. After all I have no idea what size I am going to end up at after this diet has run its course.
And so home where I spent ten minutes clearing the ice from the pavement outside our house. The pavement was covered in thick compacted sheet ice, but once the ice was cracked with a shovel it immediately started to melt. It’s odd that the people on the other side of the road have almost cleared the entire length of their pavement, but the people on our side have hardly touched it. But I’ve now done my bit.
And having done my bit, I got my paints out. Regular readers of this drivel may recall that a few weeks ago I was asking after masking tape. Today I used that masking tape in producing a border round a painting of a waterfall in a forest. As usual I can find lots of fault with the painting: I’m not happy with the cliffs, I feel the water spreads out too much, I was hoping for more from the background hills. But in the final analysis I’m quite pleased with the painting. It’s colourful and the border effect works well. It’s easily worth the bargain price of ten quid which I am asking for it. A shame no one has offered me that tenner (yet!).
It has to be said that Badger Original Landscapes has not turned out to be the money-spinner that I was hoping for. Since the launch of the business I’ve sold three paintings with a total income of under fifty quid. But when you feature in the cost of the paints and the canvas and the brushes and stuff, I’m losing money hand over fist. My cousin (whose has serious business sense) has told me that I am selling the paintings far too cheaply. She is probably right, but in these austere times no-one seems to want to spend money on paintings. Which (for me) is a shame.

Talking of money, I then spent a little while totting up the astro club’s accounts. I went through the accounts so many times, but try as I might I could not get the books to balance. We have four pence too much. All the figures add up and agree with bills and receipts. But when you add up the cash there is a stubborn four pence that shouldn’t be there. I can only imagine I short-changed myself when I was changing up some coppers.
I then wrote (typed) some letters to go with some cheques I need to post for the astro club. And in these hard times I am going to have to do something which goes very much against the grain and bill the club for my expenses: namely a book of stamps and a replacement ink cartridge.

After spending an hour (or so) playing on-line scrabble we set off to Chris's for the Saturday night film show. This evening we saw "The King's Speech" and "The Social Network". Neither were films I'd seen before, and I enjoyed both. I do like the Saturday night film show. The only drawback with tonight was coming home; oh it was cold. According to the thermometer in the car it was minus six degrees. Far too cold !!!