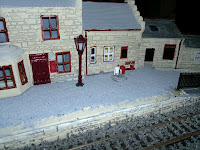 Another restless night - for once "er indoors TM" couldn't sleep, and her tossing and turning kept me awake. For a moment I had this plan that seeing how she was awake and we were both in bed.... and then I remembered what happened the last time I had that sort of thought ("Daddies Little Angel TM" was the result) so I rolled over and thought puritanical thoughts instead.
It's unlike "er indoors TM" not to sleep. She tells me she sleeps better now that I don't snore. I don't snore because I don't sleep. If she's going to be awake, I will make a point of snoring. Perhaps we could take it in turns to sleep?

Regular readers of this drivel might recall that a few months ago I had my cholesterol checked. It was a tad high, and the doctor said to check it in mid-February. Bearing in mind my dieting ways I was expecting it to be really low, and I was planning to have it checked this morning. As I got up I prepared myself for a hungry morning - one needs to have the blood taken before eating anything. And then I remembered we'd had a fry-up for tea last night. That would do wonders for the cholesterol level - I shall leave that for a week or so before having it done again.

I've received an offer for the waterfall scene I painted at the weekend. Ker-Ching !!! Not that it'll make me rich, but it will go some way to cover the cost of a bottle of black gesso (do stop me if I'm getting too technical). And, realistically, covering the costs of the hobby is all I should hope to achieve from flogging the paintings. Because if I start making loads of dosh, I'll start having to pay income tax on my profit. Which would probably be far more trouble than it is worth.
In the meantime I've signed up with a website which might help me flog some more paintings. I just need to put a few more pictures up on it.

Being Tuesday the clans gathered: this time round at Somerset Road. We stood on Matt's doorstep for ten minutes until we (and he) realised that the batteries in his doorbell have had it. We admired his model railway layout: I must admit I'm not at all into trains, but the scenery he's building is wonderful. And after a crafty bit of cake (CAKE!!!) we watched "Being Human". In a novel break with tradition I stayed awake during the show. Which was for the best. I hate sleeping through telly programs that I want to see...