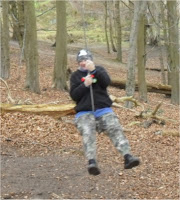 Ideally I wouldn't have had an interview scheduled on my birthday, but one takes what one is given in life (mostly). I was up before the lark, breakfasted and on my way before 7am this morning. The M25 was better than I have known it to be, and (to be fair) worse than I have known it to be as well. With the radio tuned to radio four (for a change) I trusted my sat nav, and it didn't let me down. I drove the ninety miles to Wokingham in just under two hours and immediately found my destination. Once parked up I made my way to the reception, got given a visitor's badge and was sat down. I went through my Powerpoint presentation one last time, before striking up a conversation with the chap sitting opposite me. He too was there for an interview; for the same job as I was there for.

After exchanging pleasantries with the opposition for a few minutes I was called in. First of all I had half an hour with the personnel manager which seemed to go well. I then gave my presentation which also seemed to go well, as did the following interview with the departmental managers.
Will I get the job? I don't know. For all that the presentation and interviews went well, I have no idea how well the other candidates did. It turns out that there are still interviews to be had on Friday. I was told that I probably wouldn't hear anything for a week or so. I know I shouldn't get my hopes up, but I'm crossing my fingers.

The journey home was easier than the journey there, and once home I opened my birthday pressies. I had quite a decent haul of pressies this year. And once pressied we had some lunch. Two hot cross buns and a cup of coffee - four hundred calories. Four hundred!! I then got cross playing on-line scrabble. It wouldn't allow "Latin" but was quite happy with "dunt" and "dup" and "jeed" (for 102 points!) , and would probably accept "kxvzjg" as long as someone else was playing it against me (!)

Following a flying visit from Maria borrowing hair crimpers for an 80s party, we set out to Hothfield for a walk. I'd not been for a stroll on the common for years. It was warmer than yesterday's outing, and it was good to get out. We wandered all over the common, through the bogs, admired the wildlife, and against "er indoors TM" s better judgement I played on a rope swing that the local kids had put in a tree. Who says I'm to old to play on a rope swing?

And so home again where we had coffee and cream cake (three hundred more calories) and we watched this week's episode of "Grimm". I can't help but feel that it's a good show, but it's just yet another police program. And being a Tuesday the clans gathered this evening and we watched more "Being Human": I do like that show...