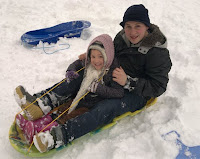 By the time we got home last night (after midnight), written history (as I saw it) and watched a couple of episodes of "Haven" it was 2.30am before I crawled into my pit. I was woken at about 8.30am by the sound of one of the neighbours scraping snow off of the pavement, and I lay for two hours fretting about life in general. At 10.30am the phone rang - it was "My Boy TM" asking about the sledge situation.
So we leapt into action, had a quick bit of brekkie, and I got really stressy because my bum board wasn't where I'd left it. After ten minutes of clumping round the house I thought (in desperation) I'd have a look in the shed. I opened the back door to find snow had piled up against the back door - over a foot up the back door.

I found my bum board in the shed (where I'd left it) together with a sledge I'd forgotten about. By the time "My Boy TM" and his entourage arrived we had amassed an fleet of three sledges. And so, suitably wrapped against the elements we set off to Washford Farm to collect littlun who'd spent the night at her auntie's house. Getting to Washford Farm was easy enough. As was coming home; even if littlun did sit herself in one of the sledges and had me drag her home.
We stopped off to drop off littlun's overnight bag, and then went up to Victoria Park. It has to be said that, like all of Ashford, Victoria Park isn't overly hilly. But we found a couple of slopes and had a go at sledging. As had quite a few other people.
And all of the sledgers were like us - adults taking small children sledging. I would have thought that older kiddies might have liked to have played in the snow. There were some teenagers making a large snowman, but other than that, there weren't many youngsters at all. I suppose it's a sign of the times. And it was also their loss: we had a great time - we found a little slope, and whizzed down it loads of times. In fact we whizzed down it until we were so cold that we were numb. Which is the only problem with snow - it is so blooming cold.

We popped round to the Fudgery for a quick warming cuppa, then came back home. "er indoors TM" considered making a snowman in the garden, but with a lack of adhesion from the snow, she gave up and we came inside to warm up a bit. Over a bit of home-made onion soup (yum!) I uploaded some photos of the sledging, and then set about uploading a video I'd taken whilst we were out. I was amazed to find that two minutes of video took up over 200 Mb, and took about an hour to upload to You-Tube.

Whilst it uploaded we conducted surgery on the Dyson; we'd lent it out a week or so ago, and today it wasn't working. We took it apart and found it was clogged solid. Every tube was blocked completely. It took a major disassembly and poke through to clear out all of the hair, dirt, grit and assorted gunge that was blocking it up. And with the thing cleaned out and carpets hoovered (dysoned!) I dozed in front of the telly for an hour or so before spending the rest of the afternoon applying for various jobs. These applications might not achieve anything immediately, but it will get my C.V. in front of the recruitment agencies. Which is where it needs to be.

And then after a smashing bit of tea we cleared more stuff from the Sky-Plus box.. Tonight we emptied off some more episodes of Star Trek: Tribbles and Triskelions this evening. Can't be bad.
Bearing in mind that most of the stuff on that Sky-Plus box are from series we've recorded from only a few channels, I wonder if I might make an economy by removing a few more channels from our subscription....