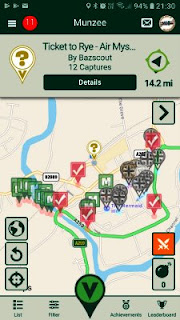 As I scoffed my brekkie I peered into the Internet. A family member was again posting rubbish on Facebook. Like so many other people he believes everything he reads on the Internet. Those who know nothing at all would seem to have taken against the 5G phone network because they simply don’t understand it and believe each other’s misconceptions. They then repost (on social media) the inaccuracies they have read, and so the it becomes common knowledge that “eating turnips gives you piles”.
Why don’t more people take thirty seconds to type whatever fallacious claim they have just read into Google and find out the truth of the matter for themselves?
There was also quite a bit of talk on the Facebook page for the Old Boys of the school I used to attend. This year sees the four hundredth anniversary of the school’s founding, and those who haven’t been back to the place in forty years are up in arms about how little is being done to commemorate the event. There was talk about a reunion… I probably wouldn’t go. Realistically anyone from my schooldays who wants to get in touch with me has already done so via Facebook.

I took the dogs for a walk round the park. As we walked through Bowen’s Field Pogo tried to pick a fight with another dog. I wish I had some idea what provokes this. He sometimes just goes completely mental for no reason that I can work out.
As we walked we met OrangeHead and her posse.  They told me how they too had met the “special” lady yesterday who couldn’t understand why dogs need to sniff and bark at each other.
I also found the Munzee that eluded me yesterday

We came home; I settled the dogs then went up to the opticians. When I was there yesterday I’d meant to pick up a copy of my prescription. I’d forgotten so I went back today. I got what I needed; as I walked back I took a little detour down past Kent Wool Growers; they’d had a fire yesterday and I thought I’d have a nosey.
There wasn’t much to see.
As I walked I deployed a Munzee. On 5 July 2015 I was given a little packet of Munzee stickers which has been in my wallet ever since. I thought I might put one out today. And I did. I wonder how long it will be before anyone goes hunting for it?

I had a spot of lunch, and then I struggled to watch the telly. Bearing in mind that I can see things at a distance far better than close up I took the dogs out again. We had a rather longer walk this afternoon. It would have gone better had some epically fat bloke not tried to latch on to us. The chap never said a word, but it was plain he was following us. I couldn’t work out if he wanted his huge dog to play with my three, or to fight them. I put the leads on to my dogs, marched off, and the fat bloke simply couldn’t keep up. If he’d just said “hello” it would have made all the difference, but he was decidedly creepy.
Whilst we were out I deployed a virtual munzee. Go me!!

We came home. I watched the last two episodes of “Daybreak”. It was a good show. I just need to re-watch it whilst being awake for most of the episodes now.
I then binge-watched the entire first season of “The End of the Fxxxing World” because the second season starts next week and I could remember it being a good show.
It was a good show; I’d just confused it with “You, Me and the Apocalypse”.