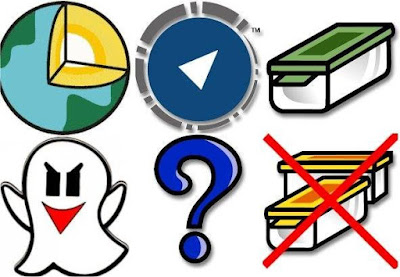 I didn’t sleep well for some reason. I got up about an hour earlier than I had planned, and over brekkie watched the last episode of “Catch 22”. The series has been watchable, but odd. In six episodes nothing much really happened, and the last episode followed in much the same vein. After an hour they just ran the closing credits with no real ending to the show. Looking on-line it would seem that the book ended equally vaguely. I can remember having the book (years ago) but can’t really remember much about it. If it was anything like the TV adaptation, now I know why.
With telly finished I had a look at the Internet. This week is the week-long national geo-meet up in Aberdeen. I hadn’t realised that the thing was a week-long extravaganza; I thought it was only over the weekend. Had I known I might have made the effort to have gone; after all I’ve got the week off work. Such a shame that I didn’t realise this. Mind you, many of these events seem to be a closely-guarded secret. I’ve lost count of the number of mega-events that I’ve found out about *after* they’ve happened. There was one such last weekend that I only found out about this morning.

I got myself organised and wandered up to the train station. I tried to buy a ticket for the eight-oh-three train to Charing Cross. The nice man behind the counter wouldn’t sell me one. That wasn’t a cheap rate train (he said). I told him that the Internet said it was. He rolled his eyes and explained to me what kind of half-wit believes what they read on the Internet. So I bought an off-peak ticket for the eight-twenty-nine to Charing Cross. I then went to the ticket barrier where the nice man said that I *could* use the off-peak ticket on the eight-oh-three train to Charing Cross, and implied that only a half-wit would listen to the nice man at the ticket office said.
Customer service has never been a strong point for railway staff, has it?

I found a free newspaper, and did the crossword as the train took me to London. Once at Charing Cross I soon found Karl, and we took to the underground. Hot, noisy, smelly… so many people packed in like sardines.
We got to Hyde Park Corner and went for a little walk. I don’t really know London, so (as usual) our route was laid out by geocaches. Many of them were Earthcaches which took us to the rather obscure parts of the capital; the sorts of places that the tourists don’t usually find. One of the other caches had a field puzzle which had me playing a strange version of hopscotch outside the head office of the BBC. We met up with some Czech cachers in an obscure alleyway used in the Harry Potter films. And we found one of the cheekiest hides ever.
It was a shame that we drew blanks in Goodge Street and at St Anne’s in Westminster, but you can’t have everything.

As we walked we found ourselves in Leicester Square. I thought we might divert to the Lego shop for five minutes. Have you ever been to the Lego shop in Leicester Square? The queue to get into the place was probably over a hundred yards long. Stuff that!
We had a rather good stilton ploughman’s for lunch, and with walk walked we had a pint of porter in Covent garden’s iconic Harp.
I took a few photos whilst we were out.

Despite the noisy toddlers watching Peppa Pig videos on the train home I slept for much of the way. Strangely the Peppa Pig videos being turned off at Paddock Wood woke me, and I picked up the newspaper that the toddlers’ mother had left and did that paper’s crossword until the train got us back to Ashford.

I got home at almost exactly the same time as "er indoors TM", and we took the dogs round the park. Pogo was a tad wilful, but there was no squabbling with other dogs, and as walks went this was a good one.
With walk walked we had a very good bit of dinner, then I set about doing the homework from the London trip. Earthcaches are akin to geology homework… I’ve sent in eight sets of answers to questions. I hope I’ve got the answers right…