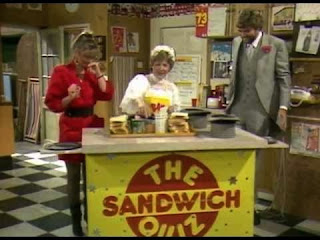 As I drove home from the night shift it became apparent that I'd missed something. Apparently it was national "drive up the middle of the road" day. I found myself mounting the pavement several times to avoid colliding with other road users who seemed blissfully aware of what side of the road on which they were supposed to be.

I got home and made straight for the loo. Last night I saw butter flavoured toilet roll in Morrisons. I was rather curious so I bought some and this morning I had a "Go Compare" moment with the various bogrolls in Trap One. Without going into graphic detail let's just say that butter flavoued bogroll was something of a disappointment.

Over brekkie I saw something which made me check the date. But it wasn't an April Fool thing. Scientists have worked out a way of hiding from aliens.
One way to detect planets in orbit around another star is to measure the brightness of the light from that star. As any planet orbiting the star comes between that star and us the star's light dims. Not much, but noticeably. It is possible that aliens might find Earth that way. After all we've found lots of planets that way. However do we want aliens to find us?
Having watche far too much science fiction, supposedly reputable scientists have a theory that if we shine humungous laser beams into space they will counteract the dimming of the sun as seen from a distant planet when we transit our sun and so render the Earth invisible.
What they haven't realised though is that for this to work we need to turn the lasers on as we start to cross the sun (from the aliens' perspective) and turn them off when the transit is complete. But having no idea whatsoever where it is that the aliens would be watching us from, rather than hiding the Earth, chances are these lasers would act as a beacon to show where we are.

We popped the lead onto "Furry Face TM" and took him out for a little adventure. We drove out to Faversham to have a mooch round a ruined church. Once a Roman temple it is the only ancient church in England which started life as a Roman temple. Or so the sign said. The fact there was a geocache under a nearby rock was an added bonus. "Furry Face TM" seemed happy to spend ten minutes chasing down rabbit holes.
I was glad to get out and do something; otherwise I woul have just slept the day away. Having said that I slept for most of the journey home.

Once home we had a quick Belgian bun for lunch, then spent a llittle while working in the garden. Several years ago the more difficult of our neighbours planted clematis and roses against his side of the fence which seperates our gardens. He's left it to grow wild, and it had got so that it was effectively impossible to get past the garden pond. A few years ago our back garden was beautiful; these days it is something of a jungle. So I decided to reclaim the back garden and we hacked back his overgrowth.
As I hacked I was expecting him to appear at any moment, frothing at the mouth and ranting. He didn't but I'm still waiting to hear from him.
In the past he has turned up on the doorstep demanding that I go tell the people who live on the other next door to him to sort themselves out because leaves from their tree has fallen in his garden. But he sees nothing wrong with his shrubberies overhanging over four feet into my garden.

I then drove a car full of cut down clematis to the tip. Having cut back all the clematis we've actually been able to get to the arbour by the pond. I toyed with the idea of getting the pressure washer out and giving the arbour a good scrub.
Instead "er indoors TM" took "Furry Face TM" for a walk and I had a couple of hours sleep. I then made some plans for a little walk next Friday. If anyone fancies wandering through the Kent mud, the more the merrier.

I watched the last episode of "Childhood's End" then spent the rest of the evening applying for promotion. Do I want promotion? I don't know. But it doesn't hurt to try. Will anything come of the application? Possibly. We shall see. Time will tell. It always does...