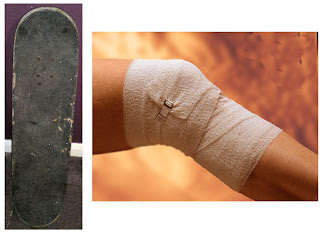 Last night I had words with the first fruit of my loin. He is on earlies this week. The phrases “quiet as a mouse” and “ninja stealth” were mentioned with reference to his getting up at silly o’ clock. This morning I was awoken at 5.30am by something which was not as “quiet as a mouse”, nor was it employing “ninja stealth”. Had last night’s conversation featured phrases such as “Krakatoa, east of Java” I might have been more impressed with his instruction following ability. This afternoon I think I found the cause of the noise. He’s dug out his old skateboard. Perhaps he’s skateboarding downstairs in the mornings?

Continuing with the weight loss campaign, I cycled to work. Where I spent the entire day sulking. I’m not really sure why. I stuck an idiot grin on my face, and tried to make the most of it, but my heart wasn’t in it today. On the plus side I managed to book another visit at the chokey, and it took less than two hours.

And then I cycled home again to find a letter from my doctor. Last week both the doctor and the foxy X-ray bird said I should phone the surgery in a week or so to get the result. Today I came home to a letter (dated last Thursday) asking me to make an appointment to discuss the X-Ray. At first sight, I thought this was somewhat ominous. So I phoned the surgery and they’ve given me an appointment for eight days hence. It can’t be that ominous.