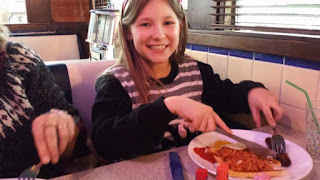 Over the last year I've been quite vocal about how I like the working pattern when I'm on nights. I like having large amounts of time off work, and I do like the independence that lone working gives me. I can listen to whatever drivel on the radio or on You-Tube I like as I work and no one complains. Ideally I wouldn't have to work at all, but all the time I am working, this isn't a bad way to do it.
Having said that I do find wondering if a twelve and a half hour overnight shift is realistically a younger man's game; last night was rather busy. After driving home after a night shift I was certainly good for nothing but a good kip.

I got home to find "er indoors TM" and Lacey were both playing with the "My Little Pony" drawing app on their tablets. They then went on to the morning cinema as I tried to sleep. "Tried" being the operative word. We were looking after Lacey's dog Rolo as well as Lacey and as I tried to sleep there were three dogs downstairs who kept finding things at which they could bark.
There is a dominance thing going on between Rolo and Fudge. Despite being half his size, Rolo is top dog over Fudge and keeps telling him. I feel sorry for Sid who is quite clearly bottom of the great pecking order.

After I'd had a kip and the girls had returned we drove out to the American Diner for burgers and chips and all day breakfasts and omelettes and bubble gum milk shake. Very tasty. As we were in the area we popped into Bybrook Barn; Fudge needed a new comb. Whilst we were there I got a bargain. I've been after a wine decanter for ages; they had some reduced from sixteen quid to four quid.
We then came home and took the dogs for a walk, and with hounds walked Cheryl arrived and took Lacey off to visit other grandparents.
I then had a cuppa and a hot cross bun. Actually a cold cross bun; I prefer them raw.

I had an email. An admin detail about the astro club, but it was in pdf format. My laptop has serious issues withpdfs. Whenever it tries to open them I get an error saying that WIndows 10 can't locate the relevent file. So I updated the reader and got the same problem. So I got another reader and still had the same problem. I then deleted all the pdf readers and... I *was* going to re-install but having nipped off for a tiddle I forgot that I hadn't re-installed them. I clicked on the pdf file and it opened perfectly in the web browser. Why couldn't it have done that in the first place?

With "er indoors TM" off film-night-ing I programmed "Hannah", my phone and my tablet for tomorrow's geo-mission as I listened to the rain. Although the forecast says the rain will stop, it is going to be very wet. I watched the first episode of "Jericho" which looks as thought it might have promise, and then watched a little "Doctor Who".
I think I shall have an early night; I've had guts ache for the last few days. It is becoming a little wearing now...