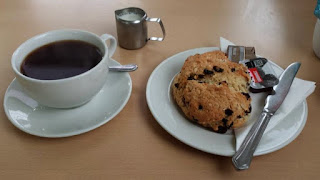 I didn't sleep well last night. I was awake for an hour or so in the small hours listening to the torrential rain. I finally dozed off only to be plagued by nightmares in which the kite-flying fraternity had declared war on the geocachers. It was all rather nasty and the Prime Minister had asked me to intervene because I have something of a foot in both camps. However both sides saw me as a traitor and it was with some releif that I was woken by a nuisance phone call just after 7am.
This call was from a new number; 001019, and when I answered it no one was on the other end. I say this was a "new" number; it is new to me. The number was well known on the "report your nuisance phone calls" web sites. I keep being told about how I can avoid these calls but it doesn't seem to matter what I do, someone from India always seems to be bothering my phone.

I took the dogs round the corner to where "Daddies Little Angel TM" and "Stormageddon - Bringer of Destruction TM" are now living. And having collected them we went for a rather uneventful walk round the park. There is no denying I was hoping to see the (nearly) nudey jogger we encountered yesterday. She was nowhere to be seen, Probably suffering from hypothermia and frostbite I expect.

As I drove to work there was an article on the radio about the Cassini probe which is currently orbiting Saturn. Perhaps because I know a thing or two about space my expectations of the show were a little higher than the might have been. But anything space-related on the radio or the telly always seems to be very dumb-ed down to me. This show could have been so much better - did the presenter *really* think Saturn has a rocky surface?

I was taking a rather round-the-houses route to work today as I needed to find at least one geocache for this calendar thingy. I had my sights set on one in Sellindge; I eventually found it buried under some mud. Something had churned up the ground nearby.
I then drove on listening to an interview with the partner of Ricky Gervais. She was quite an interesting woman. The interview ended just as I was approaching a garden centre so I popped in for coffee and cake. there is something quite therapeutic in sitting alone in a garden centre cafe with a cuppa watching the world go by.
Whilst I was there I got myself a rubber duck. I needed a duck for geocachical purposes. I also need a brick too. I shall try to blag one from somewhere.

And so the excitement of my day was all over by 11.30am. All things considered another dull day really...