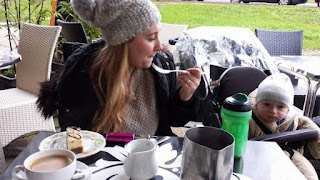 One of the many depressing things about getting older is the increasing need for trips to the loo in the middle of the night. Until we got our most recent house guest I wouldn't turn on any of the lights in the house as I made my way to "Trap One"; now I dare not walk in the dark. I was right to turn the lights on last night; there was a turd right in the way. Whilst I can't be sure which of the wolf pack dropped it I have my suspicions.
I couldn't get back to sleep after that. Despite my CPAP machine's best efforts I couldn't breathe, and I lay awake until 6.30am when "er indoors TM"s alarm went off. She was on an away-day with the candle-mongers and I got up shortly after she did. At least when being up I could actually breathe.

Over brekkie I read an article on the South Ashford Community Forum Facebook group. There are plans afoot to develop some local wasteland. This will involve building over six hundred new homes and some shops and a parking area and stuff. The plans are to build on land which has been left derelict for over ten years. It is a good plan too breathe new life into an eyesore.
However there are objections from locals. Victoria Road School is not that far away, and some people really do seem to think that building homes in the general area of a school will attract paedophiles. So (according to these stupid people) the obvious answer to this potential problem is not to put windows on the sides of these buildings that face the school.
You really couldn’t make this up. Many of the children who go to this school walk past my house in the morning. Presumably I should keep the curtains pulled until 9am in case I see a child and am gripped by unholy urges?

"Daddies Little Angel TM" and "Stormageddon - Bringer of Destruction TM" came round. We drove down to Tenterden for a little walk. Normally on a Sunday I would go for a really big walk, but a combination of "er indoors TM" being off doing her thing and a *really* cold day made me opt for something of a lazy day today. We needed to walk the dogs, so I though once up and down Tenterden High Street would fit the bill. As we walked "Daddies Little Angel TM" ranted about the futility of fish as pets, and we went into "The Secret Pantry" for coffee and cake.
They gave us some warm milk for "Stormageddon - Bringer of Destruction TM; I'm not quite sure how he managed it but he nearly drowned in the stuff. Whilst our coffee was acceptable, the cake was rather crap. Neither of us was sure what flavour it was supposed to be. But we were sure that whatever flavour the cake was supposed to be, it didn't taste of it. Two slices of rather rubbish cake and a nearly drowned baby cost over eight quid. I shan't be going there again.
As we walked I found one geocache (today was a calendar day) and failed to find two others. "Daddies Little Angel TM" claimed she saw snow flakes; I didn't but it was certainly cold enough for them.

We came home, and being "home alone" I got myself some KFC as a treat and (having devoured it) fell asleep in front of the telly for much of the afternoon; waking only to deal with the demands of the washing machine and dishwasher. "You Only Live Twice" gave way to "Bicentennial Man" and was followed by "War and Peace"; I slept through the lot.
Much as I quite liked my lazy day I couldn't do it that often - I'd go stir crazy.