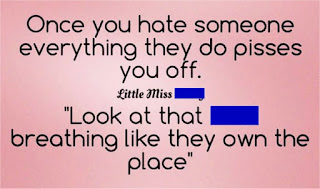 Anyone who knows me will know I have a tattoo or two on me. I quite like the things... or to qualify that somewhat I quite like the things when they are done well. Over brekkie I saw an on-line photo of a tattoo which a friend has recently had done.
Oh dear.
How do you tell someone their tattoo is frankly awful? This one looks as though a child has scrawled it. A tattoo gun is a precision instrument, not a toy.

I also saw the above meme on social media (I've censored it somewhat). It made me think. I consider myself to be an easy-going person, but the above is very true of me - it takes a while to get my back up, but once I decide against someone then I absolutely detest that person.
Having said that there isn't many people that I don't like. I spent much of the day compiling a mental list of those people. I won't publish it here, but suffice to say the list doesn't run into double figures. Nearly half of those people are ones with whom I've not had any dealings for years, and of the remainder most are people I've only ever encountered on-line and have never actually met in person.

Having scraped the ice off of my car this morning I set off to work. I kept worrying myself by glancing in the driver's mirror only to be unable to see anything because of "Daddies Little Angel TM"'s sofa which has taken up residence in my car. I am told it won't be there for long.
As I drove my piss boiled somewhat. The results of the inquiry into the poisoning of Alexander Litvenenko was published today. Having been poisoned with radioactive polonium in 2006 it has only taken ten years for the authorities to investigate the matter.
There was also consternation at leaks about an inquiry into what the late Jimmy Saville did or didn't do at the BBC many years ago.
These are yet more examples of what is wrong with British justice; how can these things take so long? In my line of work an hour is an unacceptable delay. I have trouble with a timescale of years rather than minutes.

Our old friend Science was also back in the news having announced the ever increasing likelihood of another planet in our solar system. Reports of this planet put it at being between four and ten times the size of Earth. That's quite a wide margin of error.

I got to work, and had a surprisingly busy day. But an early start made for an early finish. I came home to chaos. In theory "Daddies Little Angel TM" moves to her new home tomorrow. In preparation for this move she has lifted all of her luggage from storage (in our spare bedroom and attic) and put it where it would be more easily accessible when she loads the van tomorrow.
And having filled my living room with her clutter she's cleared off leaving me unable to get through my own house.
Some things never change...

Today was a bit of a ranty day. Must stop that...