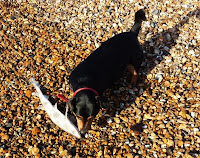 I slept for quite a long time last night, but I can't say I slept well. Much of my night was spent wrapped up in a rather disturbing dream about trying to organise a public event in London the most important part of which was ensuring that everyone got their payments refunded because the event was doomed to failure before we'd even started taking money. Pretty much everyone I've ever met was in a queue wanting thirty quid from me (even though they'd not paid out anything) and for some inexplicable reason I was the only person who could see how daft this was.
I woke shortly after 7am feeling frankly exhausted.

Over brekkie I sparked up my laptop (still plugged in to "er indoors TM" 's charger). It immediately wanted to be turned off again as part of some updating process. After ten minutes of farting about it announced that the update had failed; it had encountered some problem with Internet Explorer. Does *anyone* still use Internet Explorer? I don't.
Pretty much nothing had happened on social media. And I was surprised at how llittle interest my compilation of last years blog pictures had aroused on You-Tube.
I saw a new geocache had gone live about a mile or so from work. My immediate thought was that the First to Find would have long since been claimed before my night shift. But caches near work will be very useful if I am going to fill in this calendar challenge thingy. I'm quite glad that new caches are appearing; a couple of years ago I would get a notification pretty much every day about a new one having appeared but now I seem to get maybe only one or two a week.

I got the leads onto the dogs and pausing only briefly to chat with the geocachers in the front garden we set off to collect "Daddies Little Angel TM" and "Stormageddon - Bringer of Destruction TM". We drove down to Hythe and had a little walk. The plan was to go along the beach; we had to cut our walk short because of the biting wind. Mind you whilst out we did get covered in mud, found lots of other dogs and nearly had an incident with a dead dogfish. I took a few photos whilst we were out. I do that.

Once home "Daddies Little Angel TM" boiled up some toast and gave it to "Stormageddon - Bringer of Destruction TM" who then smeared it everywhere before tormenting the dogs with what was left. They both then set off on their missions (taking Sid with them). Being on a night shift I then went to bed for the afternoon. For some reason "Furry Face TM" didn't take the opportunity to come up and sleep at the end of the bed; having been woen by an unwanted phone call from "Chase Alexander" I came down after a few hours to find him sulking on the sofa. Clearly he's wanted to go out with everyone else.
Shortly after I got up "Daddies Little Angel TM" brought Sid home "quietly"; I'd forgotten just how "silent" she can be.

I'm just watching the episode of Upstairs Downstairs in which Miss Georgina runs down some poor deaf bloke and then I'm off to the night shift....