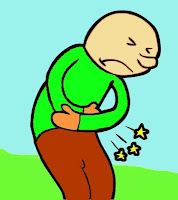 A good night's sleep; waking only a minute or so before the alarm. I got up to find that overnight a whole load of laundry had arrived in the basket from "Daddies Little Angel TM" and "Stormageddon - Bringer of Destruction TM" so I set that to scrub as I watched the latest drivel I've recorded on the SkyPlus box. Twenty years ago "Sorry !" (starring Ronnie Corbett) was hilarious. It hasn't really stood the test of time.
As I watched telly and scoffed brekkie I was conscious of the ongoing nagging pain in my stomach; I've not felt right for a week or so. I'm sure it is nothing that a good "quack" wouldn't cure, but it is uncomfortable.

And so to work, feeling rather uncomfortable. As I drove to work there was talk on the radio about opinion polls and how they generally seem not to be as reliable as one might hope. A good example of this was the last General Election in which the polls showed no difference in the public's opinion between the Labour and Conservative parties when in fact the majority had clearly been pro-Tory. There was concern expressed that opinion polls must be right for the democratic process to work. The pundits pointed out that there are a *lot* of people whose opinion actually depends on the result of the opinion poll. Having no opinion of their own, many people (lemming-like) go with what they think is the feeling of the majority. And these people feel cheated if it what they thought was the majority view turns out not to have been so. This sounds daft, but after every election I lose count of people who complain about having wasted their vote because they voted for a losing candidate. For many people expressing their own view is very much secondary to being seen to be on the winning side.
This *really* bothers me; not that I beleive in democracy, but I would have thought democracy was all about the Great Unwashed actually educating themselves and forming a considered opinion on the matters in question. But (as I often ask) what do I know? After all my opinion is usually that of a very small minority.
Perhaps I should try following the masses; I might get into less arguments.

Once at work I struggled to keep myself occupied; the junior doctors were all on strike today and consequently my reduced workload was something of a knock-on effect of said strike. With not much going on I spent much of the day complaining about my stomach ache to anyone who would listen. And as the day wore on the list of people who would listen grew shorter and shorter. If the doctors weren't all on strike I might have popped down to the emergency care centre and got myself told to take some guts ache tablets.
With little else on the agenda I looked at the leave diary and my shift patterns and booked some time off in May. Possibly a mid-week break, possibly some days out? Probably five days watching the telly and sulking. Who knows?

I came home (still feeling bloated) to find "er indoors TM" was already home. We took both dogs for a short walk then after a rather good bit of dinner Martin arrived and he and "er indoors TM" went off to the Tuesday gathering. I stayed at home this evening; ongoing guts ache had been tiring.
I slobbed in front of the telly and then I had a message. Last night I spent a couple of hours struggling to solve a geo-puzzle. After struggling to no avail I finally enlisted the help of friends. This evening the answer arrived. I had been on the right lines; I had all but solved the puzzle. However to get the final part of the correct answer it had been necessary to perform the sum 4+1+1. Despite (or because of) my degree in mathematics I had made the answer to be five. Woops.

As luck would have it, Stargazing Live was on BBC2 this evening. Not having been impressed with last year's efforts from the BBC the astro club had decided not to take part in this event this year. I was glad we hadn't; the show was utter tripe.
I'm off to bed now. My stomach still aches....